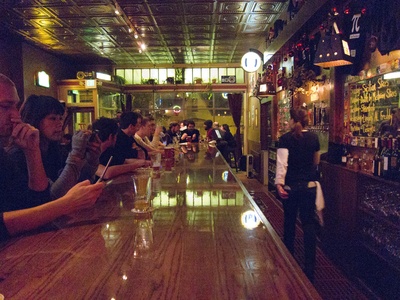 Looking down the bar, December 2011

Pi Bar's manifesto states that they're focused on making great Brooklyn-style pizza, but one could argue that they are actually focused on beer. They feature eight or so constantly rotating taps of mostly local beers and usually have cider. They also have bottled beer and offer takeaway service for the bottles.

Pi Bar does not offer spirits, but I'm pretty sure they sell wine. Fun fact: drinking wine at a beer bar makes you a bad person.

In addition to the aforemetioned pizza they also serve daily specials and a couple of appetizers including polenta fries and pretzels.

If they are not too busy, the bartenders will happily let you sample a beer before you buy it by pouring you a 1oz serving in a tiny adorable beer mug. Please don't steal the tiny mugs, you can buy them at New May Wah.

There is a bit of a motorcycle theme to the bar, due mostly to the owner(s) being into motorcycles. There are usually a few motorbikes parked out front. As the two-wheeled vehicles tend to go together, the bar is also popular with cyclists. There is a strange bike rack (a u-shape with rectangular wings) out front that is usually filled with bicycles.