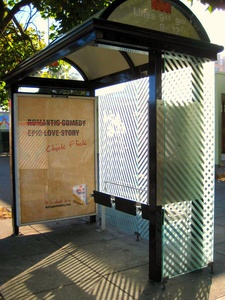 An unsleepable bus stop (2008) Despite being in California, with its famous/notorious love for the car, San Francisco is quite well served with public transport. Getting around the city is relatively quick and easy, especially in the areas around downtown. Getting into and out of the city can be a bit more of a problem, especially late at night (especially after 12:20 AM).

The primary San Francisco public transit network is Muni, the San Francisco Municipal Railway. They run streetcars and buses all over San Francisco. BART (Bay Area Rapid Transit) provides both commuter and local rapid transit service through San Francisco, linking the city with San Francisco International Airport and Millbrae to the south and to a variety of East Bay locations including Oakland, Berkeley, and Walnut Creek. Caltrain offers connections to points south on the Peninsula, including Palo Alto and San Jose.

Amtrak sends buses to downtown San Francisco to connect to its stations in Oakland, Emeryville, and elsewhere. They also have trains from San Jose, at the same station as Caltrain (Diridon Station) and a convenient connection to BART in Richmond. Amtrak works fine for regional routes such as transit to Sacramento on the Capitol Corridor; long-distance routes (such as the Coast Starlight) are frequently somewhat delayed.

ACE is a commuter rail service through the Altamont Pass. It connects to Caltrain at San Jose Diridon.

511.org has resources for planning a trip on public transit. Alternatively, use Google Maps.

Some connections are better than others.