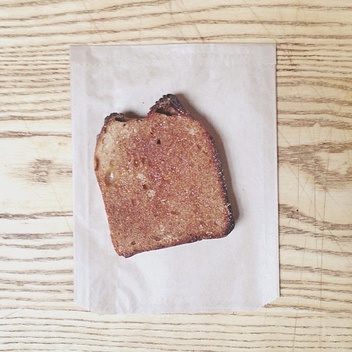 A piece of toast from The Mill.  Photo by Bianca Casimes, CC-BY-NC-ND

Sometime shortly after The Mill opened a bunch of news articles and blog posts started popping up about this idea of "$4 toast in San Francisco!"  After a few weeks, it turned into a full-blown "toast craze."  It's hard to pin down the exact origins of the "artisanal toast craze" here, but it can probably be traced back, locally, to Trouble Coffee and Coconut Club, which had been serving up warm cinnamon toast alongside coffee (and, well, coconuts) for years before The Mill opened up in 2013.  Regardless of origins, the artisanal toast craze became seen as the latest signaling mechanism that SF had shifted into full-blown hypergentrification.

The SF toast craze even made NPR's This American Life in March of 2014.

The toast at The Mill is actually $3.50, by the way.  Not that that's not expensive, of course.

Outside the United States.. 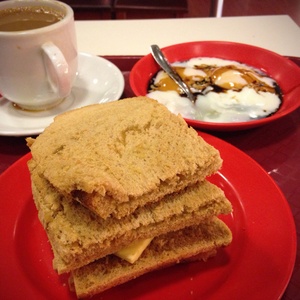 Kaya toast, served with coffee and a runny egg, in Jakarta, Indonesia.What's missing from almost every story about the SF toast craze is that, outside of the US -- and particularly in Southeast Asia -- toast has been a with-coffee staple for decades.  In Singapore, the popular kaya toast has been a thing since at least the 1940s.  The Singaporean Ya Kun Kaya chain is basically like Starbucks in over there -- you can find it, or another kaya toast variant, on nearly every block.  The same goes for Malaysia and some parts of Indonesia.

So, basically, we didn't invent artisanal toast.  We just charge a bit more for it.