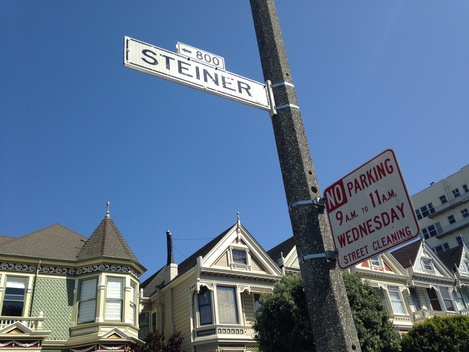 A Steiner Street sign, with the Painted Ladies visible in the background. Photo 2014.

Steiner Street is a street here in SF.  It runs from Duboce Avenue (at Duboce Park) to Chestnut Street in the Marina.

The street is named after L. Steiner and his two brothers, Leopold and Samuel, who died in November of 1911.  Steiner was a "waterman," meaning he delivered water from house to house in the very early days of the city.  According to The Virtual Museum of San Francisco:

"No doubt there was a friendship between the Steiners and Charles Gough, who was delivering milk in the pioneer period. When the Steiners became active in business affairs, and Gough was on the 1855 committee that laid out the streets of the Western Addition, he probably remembered his friend who had delivered the water."