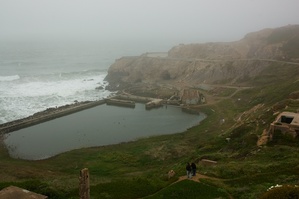 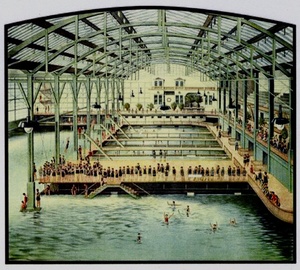 A poster from the 19th century depicting what Sutro Baths once was.History

Located at 1004 Point Lobos Ave, San Francisco, California it is one of San Francisco's best known urban ruins, the Sutro Baths were a 19th century swimming pool complex built by mining engineer and former populist mayor Adolf Sutro. He was a resident of the city as well as a self-made millionaire who designed Sutro Heights. He had expanded his oceanfront complex by being able to construct a massive public bathhouse that had covered three acres and showed off his immaculate engineering skills and artistic detail. Burned to the ground during demolition in 1966, the remains of the foundation can be viewed at the foot of the Cliff House in the Land's End district.

It was originally intended to be for the working class residents of the city to enjoy a nice day out and relax. Not only could they enjoy the massive bathhouse, there were many activities for the people there to enjoy for leisure. The admission was kept low so that the residents of the city could afford to come. It was 5 cents to take the train to get there, and it was 25 cents to take a swim, which included the swimsuit and towels. Swimmers were required to wear swimsuits that they had provided up until the 1930s.

The centerpiece of the complex were the seven swimming pools, heated to varying temps, and surrounded by a variety of trampolines, flying rings, slides, swings, toboggan slides, and diving platforms. During high tides, water would flow directly into the pools from the nearby ocean, recycling the 2 million US gallons of water in about an hour. During low tides, a turbine water pump, built inside a cave at sea level, could be switched on from a control room and could fill the tanks at a rate of 6,000 US gallons a minute (380 L/s), recycling all the water in five hours.

The End of Sutro Baths

After Sutro's death on August 8, 1898, his heirs struggled to keep the Baths afloat in the face of steep operating and maintenance costs. The baths were just not as popular with the public over time, this was mainly due to the Great Depression, implementing new public health codes and the reduced amount of public transportation. They soon began increasing expensive to maintain. When grandson Adolph G. Sutro took over, the Sutro Baths' were renovated along a south seas tropical theme, some of the pools were removed, and ice skating, dancing, ping-pong and basketball were added. On September 1, 1952 the Baths were sold to George Whitney, owner of Playland-at-the Beach, for $250,000. Under Whitney, the swimming pools were removed and the Baths became an ice skating rink. The Baths were permanently closed in 1966, burning down during demolition shortly thereafter. After the burning, the baths were on its way to being developed into a shopping center and housing units, but luckily it was saved by the public sentiment in the 1980s.

The baths are featured in a scene in Harold and Maude. Harold is walking around the ruins with his military uncle, pretends to assault Maude, and she pretends to fall through a hole in the ruins to make Harold's uncle think he's too bloodthirsty for military school. Interestingly, the ruins are in considerably better shape in the movie than they are now (the movie was produced in 1971). Sutro Baths was featured in the film The Lineup starring Eli Wallach, Robert Keith, and Warner Anderson, which was shot at the ice skating rink in 1958. Sutro Baths is also a part of the 2019 fantasy novel Middlegame written by Seanan McGuire.

Today Sutro Baths is known as a historical landmark in San Francisco, California. It is now a collection of salt water, it’s deteriorating walls, and rusted iron pieces. That is all that remains of the Sutro Baths. Although it is monitored by park services, it is open 24 hours a day 7 days a week. It is apart of the Lands End's. This site offers views of old shipwrecks as well as the access to the Sutro Bath ruins.  There is a visitor center nearby that runs from Monday- Friday 8:30 AM - 4:30 PM for any information regarding the nearby landmark. This historic site can be found on the north end of the Ocean Beach, where Geary Boulevard, and the Great Highway intersect. There a free tour through the use of City Guides for Sutro Baths that is run by non-profit volunteers. To sign up for a tour https://sfcityguides.org/tour/lands-end-sutro-heights/ click this link. This tour is approximately 1  1/2 to 2 hours long.

Both the Sutro Bath ruins and the adjacent Cliff house are part of the Golden Gate National Recreation Area and are operated by the US National Park Service. 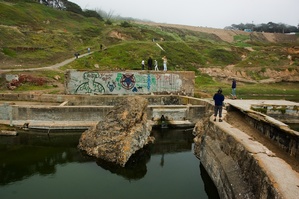 Final moments of the building