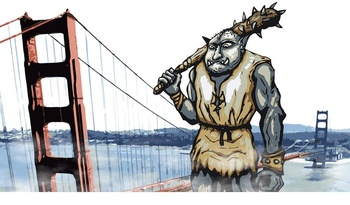 Trolls are large humanoid beasts, known for charging a toll to cross certain bridges. Many of them are employed by the Bay Area Toll Authority. Trolls are mischievous, supernatural creatures originally found in Scandinavian folklore. But they've found that they can use the Internet to spread mischief far beyond their native bridges and caves. Trolls can be found in San Francisco, too, and sometimes they even grace our beautiful SF Wiki.

Feeding the trolls is considered a bad habit. What's to be done? Ignore them! Don't waste your time arguing with someone who is not arguing fairly. Don't pleasure them with attention or worry.

If a page seems to be getting out of control, consider backing off and editing later. After all, you care much more than they do. They usually have a single-item agenda, but the SF Wiki is a lasting resource, not a real-time forum. So Don't panic!