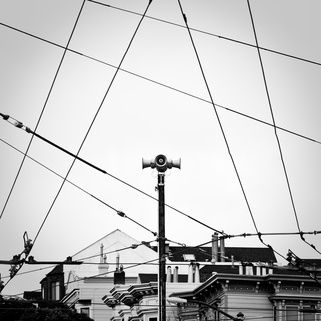 One of the San Francisco air sirens in the Castro. Photo by Justin Beck, CC-BY-NC-SA.Every Tuesday at noon, 109 air raid-style sirens around the city sound off for 15 seconds as a test for an emergency warning system. In a real emergency, the sirens will cycle continuously for around 5 minutes and will broadcast instructions instead of "this is a test." Those with access to radios should tune in to KCBS 740 AM, KQED 88.5 FM or a local news channel should this happen. In some parts of the city, such as in SoMa, the "test" message is inaudible, at least from indoors. If you work in the Financial District the siren can be fairly jarring, to say the least.

50 tone-only sirens were originally installed in 1942 as a civil defense measure. 109 new sirens with voice capabilities were installed in 2011.

The voice reading the text after the siren belongs to Dave Morey (ex-KFOG). A digital sample of the siren can be heard here: siren.wav.

The San Francisco Office of Emergency Services & Homeland Security urges those who live or work in San Francisco to consider the siren as a weekly reminder to compile an emergency-preparedness kit capable of sustaining themselves and their dependents for 72 hours. 72hours.org provides details on how to prepare for an impending emergency as well as what to do in the event of a natural disaster, terrorist attack, or epidemic. It should be noted however that on March 14, 2011, in the days following the massive earthquake in Japan, San Francisco Mayor Ed Lee was quoted on KCBS radio as saying materials for 72 hours is clearly not enough because it was taking four and five days for relief workers to reach some communities.

On Valentines Day, 2012, there was a rumor that Tony Bennett's "I left my heart in San Francisco" was going to play over the emergency siren throughout the city.  Tony Bennett was at City Hall and a bunch of people came out to see him.  But many were disappointed when the song didn't actually play over the emergency siren. Turns out the song just played over the sirens in Union Square and Hallidie Plaza.  Yes, this is for real.

Here's a short documentary created by 72hours.org and the  SF Department of Emergency Management:

Oops.At 11PM on Saturday, November 8th, 2014, the siren went off in the Bayview playing its usual "this is a test" message.  It's not yet known what the cause of this malfunction was. According to the SF Department of Emergency Management on twitter, "There has been a tech error with the Public Warning Systems in the Bayview - there is no emergency alert at this time." Later that night, at 4:54 AM, the siren went off in Noe Valley, and the response from SFDEM was the same.