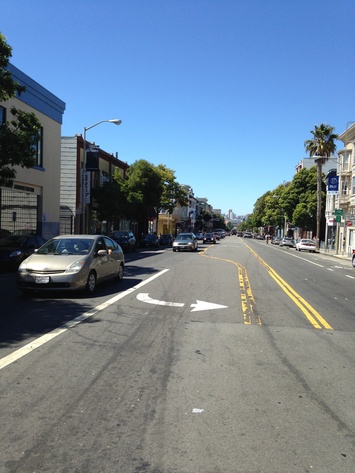 Valencia Street runs north-south, parallel to Mission Street in the Mission, starting at Market Street in Hayes Valley and it runs straight into Mission in Bernal Heights, near 29th Street.

The Dyke March goes down Valencia, and its neighborhood in the 1980s and 1990s was known as a heavily lesbian neighborhood. It is a sort of hub for lesbian-friendly spaces like The Lexington, Good Vibrations, The Women's Building, and Osento. It is an edge of the Mission and has become more and more gentrified over the years.

Like Mission Street, Valencia has a lot of bicycle riders — but unlike Mission, it has a bike lane. There are a few bicycle shops on the stretch between 20th and 22nd streets (including Valencia Cyclery), and Zeitgeist lets cyclists bring their bikes through the bar to the backyard. Gestalt Haus also has indoor bike racks.

The 26 Muni bus runs down Valencia, every 20 minutes during the day to every 30 minutes in the evening.

Valencia has a ton of restaurants and shops! Pretty much whatever food you're in the mood for can be found either on Valencia or nearby on Mission. Valencia is home to tons of independent shops, such as Paxton Gate, Dema, and Little Otsu. It's got cafes like Ritual Roasters, and bookstores like Borderlands Books, Dog eared Books, and Modern Times. Valencia Street Books used to be here as well. Ice cream, especially vanilla, may be available at Xanath.

St. Luke's Hospital is located on the corner of Cesar Chavez and Valencia.