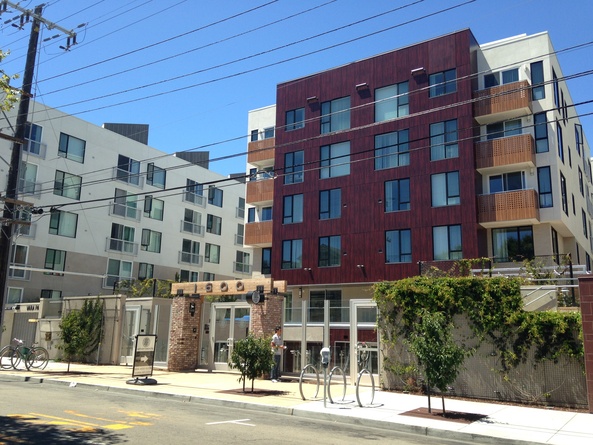 The Vara apartment building is located at 1600 15th Street in the Mission.  The building was constructed in 2013 and was formerly home to a more-or-less abandoned building.  Please update this page if you have any other information!

The building has 202 residential units, with 40 set as below-market.  When they hit the market in 2013, they were going for $2675 for a studio to up to $4830 for a 3 BR.  It's unknown if any of the apartments are for sale, or if they're just rented out by the building owner.  It looks like it's primarily an apartment building, based on their website.

On January 1st, 2014, protestors who had previously blocked some tech shuttles moved on to the apartment complex, with Mission Local reporting:

The message grew even more antagonistic when the crowd stopped in front of the new gleaming Vara apartment complex at 15th and Mission. A few of the new residents came out on their balconies to see what was going on with bewilderment and mild amusement — and a half dozen recorded the spectacle with smartphones.

They immediately became the target of the crowd’s class warfare.

“We hate you and the Mission hates you!” the crowd chanted in unison. “We know where you live and we will burn this place to the ground!”

“What did I do?” a young woman yelled back from above the building’s garage. “I just moved here; I don’t know what’s going on!”