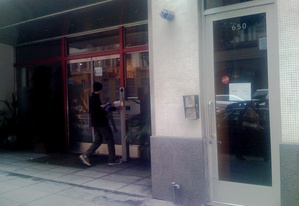 An intensely crappy photo of the Yelp office at 650 Mission St.

Yelp is a website where people can post their reviews of businesses such as restaurants, bars, nightclubs, stores, and movie theaters.

Yelp's headquarters are at 650 Mission Street, right next to Soup Freaks. Here's lots of pictures and an article about their office.

Yelp also faces lots of extortion claims: "Since launching nearly a decade ago, Yelp has been subject to endless criticism by business owners who accuse the website of manipulating reviews based on whether the companies fork over advertising dollars." [source]. This 2009 East Bay Express article provides a good primer on the issue. There are many more news articles about this below.

In 2013 they worked with Mayor Ed Lee's office to get health inspection data for SF restaurants into Yelp entries: "San Francisco’s technology department worked with Yelp’s engineering team, in partnership with the city of New York, to create technical standards for restaurant health data that other cities, sites and apps can take advantage of." [source]