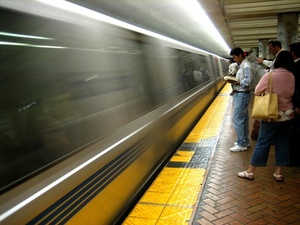 A BART train enters a station (I can't remember which)

BART stands for Bay Area Rapid Transit and is a high-speed rail system with 44 stations. It travels through eastern San Francisco, from Millbrae on the peninsula and ending at four stations in the East Bay: Richmond, Pittsburg/Bay Point, Dublin/Pleasanton, and Fremont.

BART connects with Caltrain in Millbrae and with Amtrak in Richmond. It makes a stop at SFO and there is a shuttle from the Coliseum station to the Oakland International Airport. The four northernmost San Francisco BART stations are also Muni Metro stations. To connect with Amtrak, riders can take either the Richmond-Millbrae line or connect to the Richmond-Fremont line at Oakland City Center/12th Street in Oakland when direct trains are not available. There is no direct Richmond train on Sundays and in the evening.

Bikes may be brought onto BART trains, with a few restrictions. Bikes are not allowed in the first car of the train and in crowded cars. During commute hours (weekdays between 7:00 and 9:00 AM and 4:30 to 6:30 PM), bikes are not allowed in the first three cars of the train. It is also prohibited to take bikes onto escalators, though a few stations have bike ramps inset into the stairs, such as the 16th Street station, which has a bike ramp along the edge of stairs in the southwest corner of 16th and Mission.

More details on bike rules can be found on BART's website, here.

Bathrooms in underground stations in San Francisco, Oakland, and Berkeley have signs that say something to the effect of, "Due to terrorism concerns, you cannot use the toilet." i.e. Bart is too cheap to maintain the downtown bathrooms or they are getting vandalized too much. http://www.sfgate.com/cgi-bin/article.cgi?file=/c/a/2007/07/16/MNG9TR15PL1.DTL

Several changes were implemented to BART service on January 1, 2008 and these changes were eliminated in September 2009. BART trains now run less frequently every weekday after 7 pm and all of Sunday.

This line ends at Daly City and no longer goes to San Francisco International Airport.

The Richmond-Millbrae line now provides direct access from Amtrak in Richmond to Caltrain in Millbrae. Service is limited to weekdays before 7pm, and now starts around 4 am instead of 5 am. On weekends and evenings, this line goes from Richmond to Daly City.

Like the Richmond-Millbrae line, the Pittsburg/Bay Point-SFO line used to stop at Daly City. Now it travels to SFO, with the earliest train arriving at the airport at 5:15 am instead of 5:31 am. The line also goes to Millbrae after 7pm and on weekends.

Another change implemented to BART service was a fare increase. Fares within the city raised from $1.50 to $1.75. The most expensive trip, which is between Pittsburg/Bay Point and Millbrae, now costs $7.05 instead of $6.60. BART's reasoning for increasing these fares is based on inflation.

BART's fares are loosely based on the total distance traveled within the system. Passengers can ride in between any of the eight San Francisco stations for no charge with a Fast Pass, which costs $76 a month. Individual BART tickets can't be combined, but any ticket can be added to at either a fare machine or an add-value machine. However small value tickets can be collected and exchanged for a single ticket equal to the value of the collected tickets. Alternatively, tickets with small amounts of change remaining can also be donated to local charities via the Tiny Tickets Program. 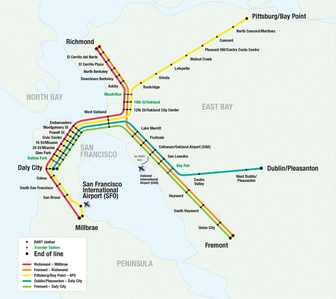 The BART system (CC-BY Trucy Phan)
BART's San Francisco stations, from north to south are below: 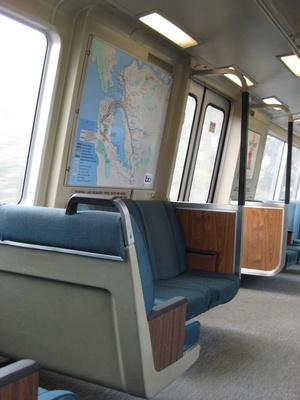 Inside a BART train (July 2008). Peninsula BART stations, from north to south, are in:

A BART machine crashes and reveals its hidden secret: Windows (2007). 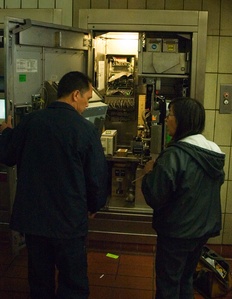 BART launched the myBART program in 2007 as an interactive resource providing passengers with additional BART information, such as a calendar of free events near stations, as well as discounts on things such as admission to other events, and contests to win BART tickets. Unlike bart.gov, myBART's site is written in a humorous, youthful tone — possibly intended to give the service a more approachable demeanor. 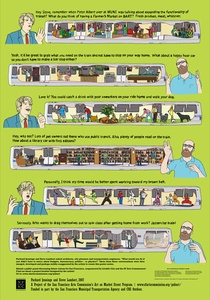 In November 2007, BART announced that six of its stations will get Peet's Coffee shops. However, eating and drinking in trains and stations is still banned.

In February 2008 a trial to offer Wi-Fi on trains was started. 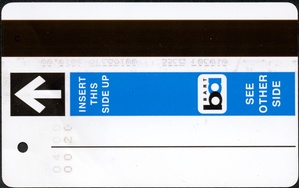 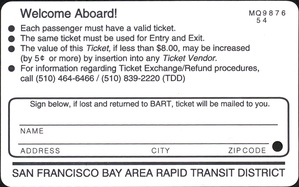 Trivia: The hole in the Bart ticket is to let vision impaired people know which way to insert their ticket into the fare gate.

If you'd like to exercise your First Amendment right to free speech on BART, make sure you obtain a Free Speech Permit.

Need help finding your way around? Directions can help you.