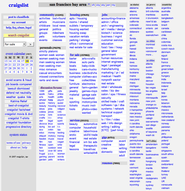 craigslist is a website where you can "get all the basics in your local area". It's insanely popular here in SF. craigslist functions as a huge classifieds listing / online flea market where people exchange everything from laptops and apartments to anonymous oral sex. It's quite possible that if you talked shit about craigslist at a bar you'd get your legs broken.

craigslist is usually noted for its simple design, its basics-focused approach to adding features to the site, and its down-to-earth attitude overall. 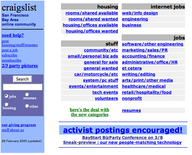 For many years of craiglist's existence it was exclusive to the sf bay area, and used almost exclusively in the city. In 2000 craigslist began expanding into new areas, and has been pretty successful at it.

The craigslist office is a victorian house in the Sunset. 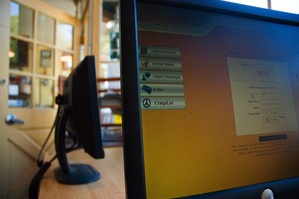 This Internet kiosk at Progressive Grounds lists craigslist as one of the five preset buttons.