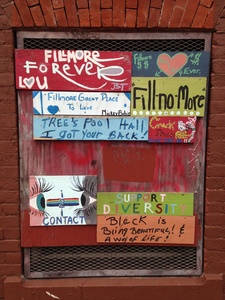 The Western Addition, also known as The Fillmore, is a neighborhood in the city of San Francisco, located northeast of Alamo Square. If you're not here to put out a five-alarm blaze, you're probably here for the jazz, so it's also called the Jazz District. 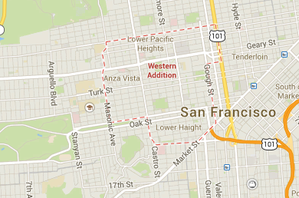 Google Maps (2014) defines the Western Addition as being giant, encompassing the Lower Haight, Lower Pac Heights, and Hayes Valley. Nobody else really thinks of it as this big. The Western Addition, like many neighborhoods, is ill-defined. Some maps draw it as encompassing all of Alamo Square Park and a significant portion of what is now known as "NoPa," while others define it as the area north of Golden Gate, extending to Geary.

Western Addition intersects and/or overlaps with the Alamo Square neighborhood, NoPa, the Fillmore District, Lower Pacific Heights and the Lower Haight, depending on how you mentally define it.

Based on how many in the neighborhood talk about the Western Addition, its borders appear to have shrunk over the past several years to encompass an area containing a number of lower-income housing units.  At the same time, new neighborhood names such as NoPa have appeared, and the Alamo Square neighborhood began to mentally capture more and more of the common vernacular.  This is no doubt due to the efforts of real estate agents.

This is an area that was formerly a part of Japantown. However when many Japanese residents were put in interned to concentration camps during World War II, their land was taken over by the city government. 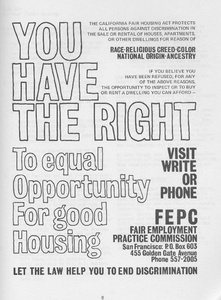 In the 1950s and 1960s, large parts of the neighborhood were razed by the San Francisco Redevelopment Agency. The agency both purchased houses from residents who sold them willingly and also used eminent domain to buy out local businesses and houses - but many years passed before housing projects were built for the displaced residents, who were primarily people of color. Much of these changes happened under the agency leadership of M. Justin Herman (1909–1971). In 1966, the Western Addition Community Organization (WACO) was started by neighborhood activist Mary Helen Rogers (1926–2006); and they worked to stop the redevelopment process.

In a 2008 article about the redevelopment project finally ending, SF Gate wrote this "urban renewal" project was "was touted as a move to wipe out blight but actually destroyed the city's most prominent African American neighborhood..." Our community is gone and never coming back, and that is painful." The displaced residents had received notices about the promised housing projects, with pages like the following (see image of booklet, "You Have The Right"). 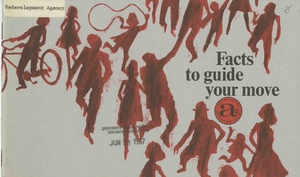 This booklet was handed out by the SF Redevelopment Agency for people whose homes were going to be razed for the redevelopment of the Western Addition. (October 1966)

The San Francisco Redevelopment Agency also handed out a booklet to residents called Facts to Guide Your Move (1966; viewable via Internet Archive), explaining the redevelopment, the resettlement process, and rights and privileges available to the displaced. This included some reimbursement, house-hunting help, access to a Community Services Representative (a social worker), and a homemaker who could "call on you to explain some of the ways to make housekeeping easier".

For many years the neighborhood was home to the St. John Coltrane Church, an African Orthodox Church that centered around jazz music.