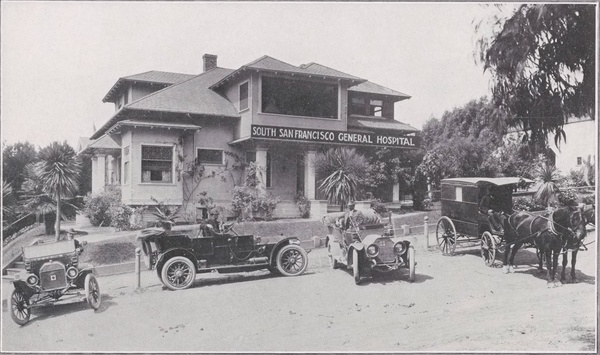 The Plymire-Schwarz House was built in 1905 by Dr. H.G., Harry (aka Henry) Garrison Plymire and was South San Francisco's first hospital originally located at the northwest corner of Grand and Spruce avenues. Dr. Plymire was one of South San Francisco's first physicians. Dr. Plymire and his brother, Dr. Brandley Plymire treated patients that came to the hospital with emergency (non-life threatening) or industry-related illness or conditions. In fact, many of their patients included factory and industrial workers. Dr. H.G. Plymire served as the first president of the San Mateo Medical Society and also as the San Mateo County coroner.

The Plymire Hospital's central location spared the residents of San Bruno, Daly City, and Colma the cost and inconvenience of having to travel to San Francisco or San Mateo for treatment. The Plymire brothers practice only lasted until 1915 after Dr. Harry died of pneumonia at the age of 38. Subsequently, the practice and house were sold to Dr. Frank Dolley who moved the house (completed in 1918) to its current location at 519 Grand Avenue and named the South San Francisco General Hospital. The year the house was converted into a hospital was just in time to treat those affected by the 1918 Influenza (Spanish flu) Pandemic (H1N1 virus).