Welcome to the Shijiazhuang LocalWiki!

Shijiazhuang (Chinese: 石家庄; pinyin: Shíjiāzhuāng), also written Shikiachwang or Shihkiachwang, is the capital and largest city of North China's Hebei province. Administratively a prefecture-level city, it is about 263 kilometres (163 mi) southwest of Beijing, and it administers 6 districts, 5 county-level cities, and 12 counties.

At the 2010 census, it had a total population of 10,163,788, with 2,861,784 in the urban area and 3,995,290 in the Metro Area (comprising five districts Luquan City, and the counties of Zhengding and Luancheng. Gaocheng City is about to be part of the Shijiazhuang metropolitan area as urbanization continues to proliferate. Shijiazhuang's total population ranked twelfth in mainland China.

Shijiazhuang is a modernizing and ever growing city. It experienced dramatic growth after the founding of the People's Republic of China in 1949. The population of the metropolitan area has more than quadrupled in only 30 years as a result of fast industrialization and major infrastructural developments. Shijiazhuang is a major transportation hub in the region which has contributed to the city's fast growth and development. From 2008 to 2011, Shijiazhuang implemented the three-year plan which concluded with the reorganization of the city resulting in an increase of green areas, improved urbanization (new buildings, new roads and road plans). The three-year plan was a success and even after it ended, the city continues to benefit from the major projects that were implemented with the opening of a new train station, new airport and a subway system Even with the green areas, however, Shijiazhuang continues to suffer from pollution. The top ten cities according to days suffering severe pollution includes Shijiazhuang.

The oldest name of the city was Shiyi. In pre-Han times (i.e., before 206 BC) it was the site of the city of Shiyi in the state of Zhao, and from Han (206 BC–AD 220) to Sui (581–618) times it was the site of a county town with the same name. With the reorganization of local government in the early period of the Tang dynasty (618–907), the county was abolished. Shijiazhuang then became little more than a local market town, subordinated to the flourishing city of Zhengding (modern Zhengding) a few miles to the north.

The city stands at the edge of the North China Plain, which rises to the Taihang Mountains to the west of the city, and lies south of the Hutuo River (Chinese: 滹沱河; pinyin: Hūtuó hé). From west to east, the topography can be summarised as moderately high mountains, then low-lying mountains, hills, basin, and finally plains. Out of the eight east–west routes across the Taihang Mountains, the fifth, the Niangzi Pass, connects the city directly with Taiyuan, Shanxi. 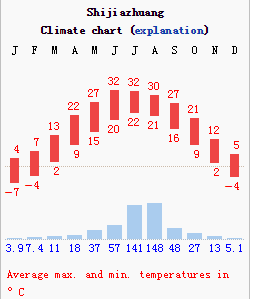 The city has a continental, monsoon-influenced semi-arid climate (Köppen BSk), characterised by hot, humid summers due to the East Asian monsoon, and generally cold, windy, very dry winters that reflect the influence of the vast Siberian anticyclone. Spring can bear witness to sandstorms blowing in from the Mongolian steppe, accompanied by rapidly warming, but generally dry, conditions. Autumn is similar to spring in temperature and lack of rainfall. January averages −2.3 °C (27.9 °F), while July averages 26.8 °C (80.2 °F); the annual mean is 13.38 °C (56.1 °F). With the monthly percent possible sunshine ranging from 45 percent in July to 61 percent in May, the city receives 2,427 hours of sunshine annually. More than half of the annual rainfall occurs in July and August alone.

The oldest name of the city was Shiyi. In pre-Han times (i.e., before 206 BC) it was the ...
History
Shijiazhuang has direct administrative jurisdiction over: Map Name Simplified Chinese Hanyu Pinyin Population (2010) Area (km²) Density (/km²) ...
Administration divisions
Explore more pages