Passing on the red gene, forging a historical chapter among clouds 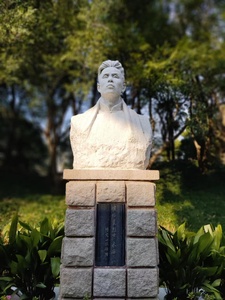 Hou ShaoqiuHou Shaoqiu (1896-1927), male, Han nationality, was a native of Songjiang (now part of Shanghai), Jiangsu Province, and a member of the Chinese Communist Party.

In 1918, Hou Shaoqiu entered the Nanyang Public School. During the May Fourth Movement, he actively participated in solidarity activities and served as secretary of the Education Section of the Shanghai Federation of Students. He joined the Kuomintang in 1921 and then the Communist Party of China in 1923.

He was very concerned about women's emancipation and sold his family's assets to take over the private Jingxian Girls' School, which was forced to close down, and was hired by the Leyi Girls' High School in Suzhou as the school director and teacher. In the school, he secretly established the first Chinese Communist organization in Suzhou, the Suzhou Independent Branch of the Chinese Communist Party.

On April 10, 1927, the right wing of the Kuomintang arrested and killed revolutionaries in Nanjing. He was arrested when he gathered relevant people to discuss measures to deal with the situation. The enemy tortured him severely, tortured him to extract confessions, and used both hard and soft methods, all of which failed to shake his revolutionary beliefs. When the enemy had no other choice, they put him in a sack and stabbed him to death alive. At the time of his death, he was only 31 years old.

Hou Shaoqiu's famous quote: The greatest happiness of the greatest number of people is the ultimate goal of life.

Songjiang is the root of Shanghai, and on this land, a great man was born, the first Communist Party member in Songjiang, the promoter of the national revolutionary movement in Songjiang, his name was Hou Shaoqiu.

Shanghai Nanyang Public School
From 1913 to 1917, he studied in Jiangsu Provincial No. 3 High School (now belongs to campus of Songjiang No. 2 High School). He was deeply influenced by Dr. Sun Yat sen's idea of "saving the country through industry", and was admitted to the May 4th Movement of Civil Engineering Major of Shanghai Nanyang Public School, with a bright future. However, a patriotic movement completely changed his fate.

Shaoqiu is making a speech at schoolIn 1919, the May 4th Movement broke out. He was an active member of the youth, and he initiated and organized the National Salvation Corps of Ten. Or in the school, or in the street, make a speech to fight imperialism and save the country. He actively spread new culture and ideas. He actively participated in the solidarity activities and served as the secretary of the Education Department of the Shanghai Federation of Students. In order to publicize the revolution, he and his fellow villagers successively edited and issued the "Problem Weekly" and "Songjiang Review" to promote science and democracy, oppose the old ways and feudal superstition; Publicize socialism and introduce the October Revolution in Russia and the Three People's Principles proposed by Dr. Sun Yat sen.

After the outbreak of the May Fourth Movement, he and Yun Daying, under the leadership of the CPC Central Committee and the CPC Shanghai Committee, led the Kuomintang organizations in Shanghai and Jiangsu province to participate in the anti-imperialist patriotic movement, and he served as the chief commander of the students of Shanghai University.

In 1927, he was the secretary of the CPC Jiangsu Provincial Committee and was unfortunately arrested on the eve of the "April 12" counter-revolutionary coup. In prison, he was brave and persistent in his struggle. He was unmoved by the torture of the enemy and the lure of high officials, showing the unyielding revolutionary spirit of the Communists. When the enemy got nothing, they then killed Hou Shaoqiu and the others with knives and put their bodies into sacks, and threw them into the Qinhuai River. He died heroically for the Party and the people at the age of 31.

On April 9, 1927, Chiang Kai-shek set up a plan in Shanghai to "purge the Party" by violence, and the rightist Municipal Party Headquarters and the General Labor Union of the Kuomintang immediately became active, sending hooligans and thugs to break into the temporary offices of the provincial and municipal party headquarters of the leftist Kuomintang and rape them, kidnapping Zhang Shu-shi and Huang Jingxi, executive members of the provincial party headquarters. At the same time, the Nanjing Municipal General Labor Union was also destroyed.

That night, Hou Shaoqiu presided over an emergency meeting of the revolutionary groups in Nanjing and decided to hold a "Nanjing Citizens' Conference to Purge the Counter-Revolutionaries" at 9 a.m. on the 10th. On behalf of the provincial party headquarters, Hou Shaoqiu angrily denounced the counter-revolutionary crimes of the reactionaries and strongly demanded that the perpetrators be punished, the innocent comrades were released, and the pseudo-labor federation be closed. After the meeting, led by Liu Chongmin, an executive member of the Provincial Party Department, and others, the whole group went to the General Headquarters of the National Revolutionary Army to petition Chiang Kai-shek. Due to the bloody suppression of the reactionaries, the petition demonstration failed. At 11 o'clock that night, Hou Shaoqiu summoned the responsible Communist Party cadres from various revolutionary groups to an emergency meeting at No. 10 Sagat Alley to discuss countermeasures. 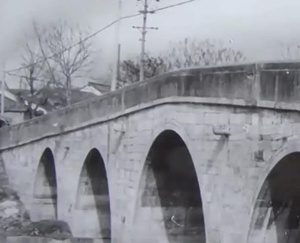 Shaoqiu refused Chiang Kai shek's terms of surrender and was brutally killed and dumped at Jiulong Bridge in Nanjing
Due to the lack of secrecy, at 2 o'clock after midnight, the meeting was surrounded by reactionary police, and Hou Shaoqiu, Xie Wenjin, and 10 others were arrested together. After the arrest, he was brave and unyielding, not afraid of high pressure and intimidation, despite the threats and temptations, and always persisted in the struggle, showing the fearless revolutionary spirit of the Communists. In the end, Hou Shaoqiu, Xie Wenjin, Liu Chongmin, and more than ten others were tragically killed at the age of 31. 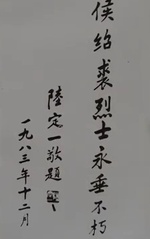 Lu Dingyi's writingLu Dingyi (Minister of the Propaganda Department of the Central Committee of the Communist Party of China) wrote: "Martyr Hou Shaoqiu is immortal".

After liberation, he was posthumously recognized as a martyr and a monument was erected by the people's government of Songjiang County to commemorate him. In 1987, a Hanbai jade bust was built on the campus of Songjiang No. 2 High School (formerly Jiangsu No. 3 Middle School). 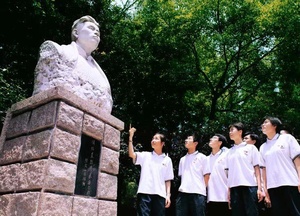 Respecting revolutionary martyrsSimilarly, every year, in front of the statue of Hou Shaoqiu, a solemn ceremony is held to swear in new members. The resounding and inspiring oath echoes around the statue of martyr Hồu Shao Qiu, and the aftershocks curl up. It seems to be a conversation across time and space with the martyr who died 90 years ago. 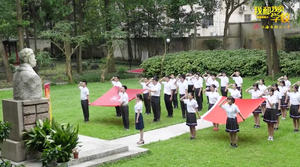 Evaluation and recollection of Hou Shaoqiu

Hou Shaoqiu's great grandson, Hou Shaoxiang recalling in "Songjiang Red Code": "Before leaving the house, the nine-year-old son said to him, 'Dad, don't go.' However, Hou Shaoqiu chose to leave. Once he left, he never came back. He himself knew that he was unlucky, but he finally chose to sacrifice his life for the revolution without hesitation."