Elliot Balter (1926-2006) was a sculptor and an educator. He studied at Biarritz Art School in Biarritz, France, the Art Institute of Chicago, and the Institute of Design at the Illinois Institute of Technology. Balter was one of the founders of the Skokie Northshore Sculpture Park and he also taught art at Niles North High School. His work has been exhibited at various locations around the United States and in Paris, Barcelona, and London.

Originally from Chicago, Balter moved to Skokie with his wife Fannie in 1962. Together Balter and wife designed and built a home in the Skevanston neighborhood. In 1985, Balter opened the backyard of his home to the public as the Skokie Sculpture Garden. 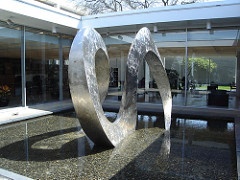 Balter’s sculpture “Swans” created in 1979 is on display in the water courtyard at the Skokie Public Library.