Union Oil built the tank farm along Tank Farm Road in 1910. It was a major storage facility for oil from Taft and Kern County en route to Avila Beach for loading onto ships. It was the world's largest facility of its kind in the 1920s. On April 7, 1926, lightning struck a tank and set off a series of explosions and fires. Flames were said to be as high as 1000 feet. In the end, over 8 million barrels of oil were lost. The fire sucked in so much oxygen that the wind broke windows, collapsed six houses, destroyed roofs in Edna, and even uprooted trees. Smoke was seen as far as Fresno, soot turned livestock black in Santa Margarita, and burning timber from the blasts fell from the sky up to 2 miles away.

The Tank Farm Fire is the worst environmental disaster to hit the Central Coast. Flaming oil covered 900 acres of land and to starve the fire, a massive amount was pumped into the ocean. A river of fire burned down San Luis Creek to Avila for up to 2 weeks. It is said that even today, you can find pieces of glass near the original site of the tanks formed from the intense flames. The land is still deemed toxic today, though a rehabilitation and development project is (as of 2014) being discussed with Chevron, the current site owner.

From the SLO Tribune. Source: http://sloblogs.thetribunenews.com/slovault/2010/01/san-luis-obispo-tank-farm-fire/

From the SLO Tribune. Source: http://sloblogs.thetribunenews.com/slovault/2010/01/san-luis-obispo-tank-farm-fire/ 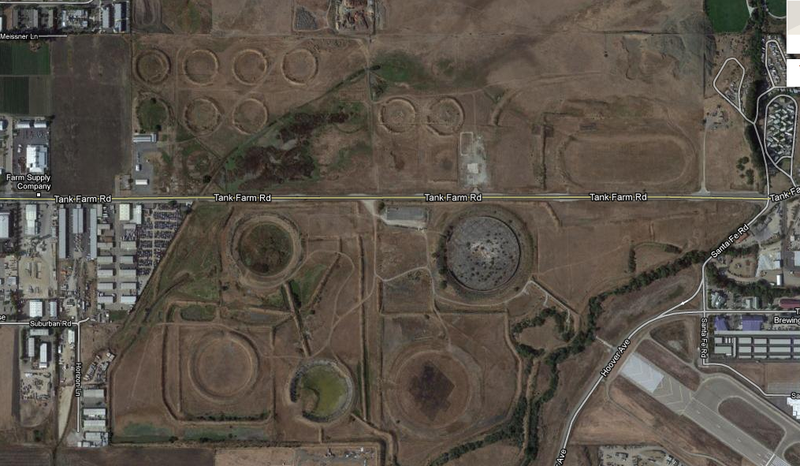 Aerial shot of the tank farm area in 2013. Check it out on Google Maps.