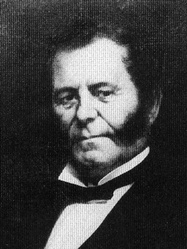 This visionary man shaped the development— and destiny— of Sonoma. When he first arrived in the valley as a young lieutenant from the presidio of Yerba Buena (later known as San Francisco) in 1835 he was just 28 years old, and had only been married to Francisca Benicia Carrillo a few years.

He quickly established a military post to protect the mission, and surveyed the area himself with a pocket compass to plan the rapidly growing pueblo of Sonoma. When the region passed from Spanish to Mexican rule, Vallejo became the administrator of the secularization of the mission.

Recognizing the inevitability of an increasing population arriving from all parts of the world, Vallejo proved a capable politician. After the Bear Flag Revolt in 1846, when California became an independent republic, he served on California's first constitutional congress. Then, after California was finally admitted into the United States in 1850, he was elected state senator.