A Tale of Two Railroads 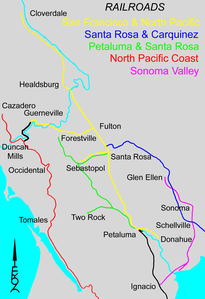 Source: "Wikimedia Commons". Railroads have played a significant part in the formation of the valley as we know it today. While the history of the railroad in Sonoma Valley consists of at least 15 known railroad companies, there were ultimately two lines that ran through the valley by 1889.

The first railway line was the "Sonoma Valley Branch" of the San Francisco & North Pacific Railroad which at that time ran from a connection at Ignacio all the way through Sonoma to Glen Ellen. This line was also referred to as "The Donahue Line" for Peter Donahue who appears to be the principle businessman behind its establishment.

The second railway line was the "Santa Rosa Branch" or "Sonoma Valley Branch" of the Northern Railway which ran from Santa Rosa to Napa Junction.

While this railroad was not located in Sonoma Valley, it is part of the ancestry that lead to the development of rail lines into Sonoma Valley. Chartered in 1862, Petaluma & Haystack Railroad was the kernel of what was to become the Sonoma & Marin Railroad.

The efforts of the Sonoma & Marin Railroad to connect Petaluma with San Rafael were seminal to the linkage of Sonoma Valley to San Francisco. However, the line to San Rafael was only partially completed (i.e., only graded) when it went bankrupt and Peter Donahue purchased and consolidated it's assets into the San Francisco & North Pacific Railway in 1876. This was the beginning of what locals would call the "Donahue Line".

The line to Sonoma Landing was abandoned in ????.

Today, the "Ignacio to Glen Ellen" or "Donahue Line" is commonly known as the Northwestern Line. You can see the stops along the route if you visit that page.

The Santa Rosa & Carquinez Railroad was incorporated on March 25, 1887 with the intent of building a line from Napa Junction to Santa Rosa. On May 15, 1888, before any of the Napa-Santa Rosa line was complete, the SR&C was merged into the Northern Railway.

Today, the "Santa Rosa to Napa Junction Line" is commonly known as the Southern Pacific Line. You can see the stops along the route if you visit that page.

The branch was abandoned in a large number of short segments between 1934 and 1975, but the 16 miles from Ignacio to Schellville remained in service as the connection between the Northwestern Pacilic and the Southern Pacific until 1996(?). 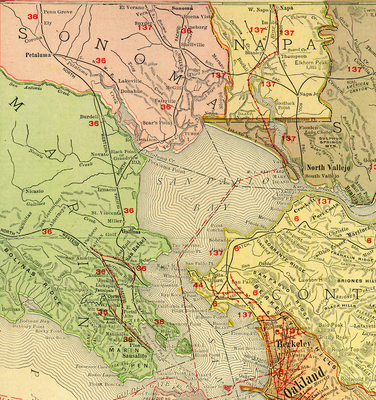 Rand McNally Atlas, 1911. Source: Chip Roberson The family tree diagram and the map from 1911 Rand McNally Atlas show the results of 50 years of railroad development in and around the Sonoma Valley.