He died on April 15, 1865 in Washington D.C. at Ford's Theatre. The President was attending the play "Our American Cousin" when John Wilkes Booth fired a bullet into his head fatally wounding him.

Lincoln moved to Springfield in 1836 and practiced law for the next 10 years.

Abraham Lincoln then served as the President of the United States of America from 1861 until his death in 1865. 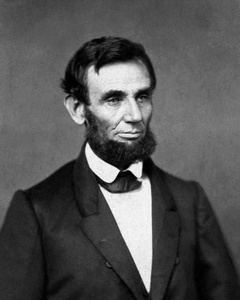 Lincoln's home in Springfield, Illinois is still available for the general public to view. Tours can be given of the home on any day from 9:00AM to 4:30PM. The neighborhood the home is found in has been preserved to recreate the experience of living in Lincoln Era Springfield. The roads are lined with wagons, candles light the homes, and the street lamps resemble those of older times. A few pictures of the home and surrounding area are shown below.