The Old State Capitol is widely considered to be one of the most notable landmarks within the Downtown Springfield area. The creation of this historic site marks the fifth capitol building built for the U.S. state of Illinois. The building was built from 1837-1840 and served as the state house from 1840-1876. This building is also where Abraham Lincoln presented his famous, "House Divided" speech to others in 1858 inside of the representatives hall.  The building is open on Mondays-Fridays from 9-5pm with closings on federal holidays such as New Year's Day, Presidents Day, and Labor Day. (1) 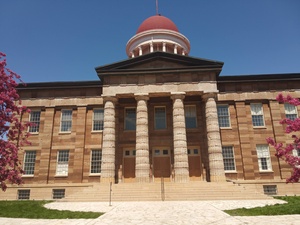 This building holds a variety of important rooms and architecture inside such as modern stair steps, a brochure display, and portraits of famous political figures that were seen within the 1800s. In order to collect more information about this area, a tour guide named Bailey Doris answered a few questions which made it possible to gain more background information about this important landmark. The standout factor about this building to her is that this is the area in which Abraham Lincoln worked and is the place where the house Divided speech was given. When asked why this building is here alongside of the New State Capitol, the response given was that they simply needed more space. This building was originally made around the mid 1800s but around 1960, became redone and refurbished with new stone lofts embedded into the building. As a whole, the exterior and surrounding area was still kept intact, but the interior area was redone. 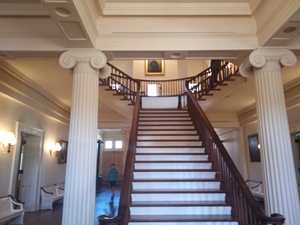 Steps leading into the Capitol Buildings second floor for tourists. 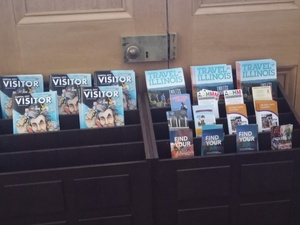 Brochures of various events that are within downtown Springfield 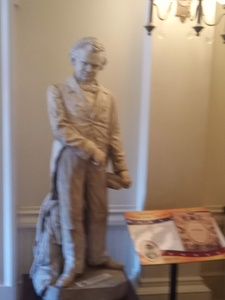 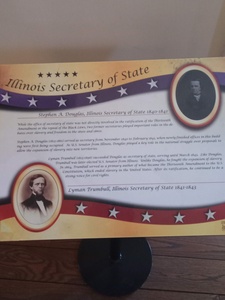 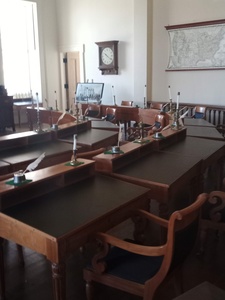 The senate Chamber which is the spot where Lincoln presented his  "House Divided Speech."

The architect behind this building was a man by the name of John, F. Rague who had a focus towards the Greek Revival style of building the site. The Old Capitol officially became a National Historic Landmark in 1961 largely in part due to the association the building has with Lincoln and his rival Stephen Douglas who can be seen in the earlier statue. The main feature of this building that helped improve its reputation towards being an important landmark is that it is a site of candidacy announcements  by people such as Abraham Lincoln and a more recent president in Barack Obama. (2)

This building also had a role to play towards the Illinois Freedom Project which was centered around having African Americans being seen as equals and gaining their citizenship. As seen with below picture, Lincoln played a vital role towards the abolishment of slavery through serving as a voice towards colored people and using the words of the Declaration of Independence in order to aid his reasoning towards having Illinois push past slavery. (3) 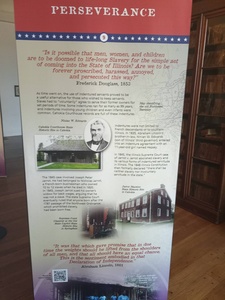 One of the 12 pages of text centered around the Illinois Freedom Project and found within the Old State Capitol. 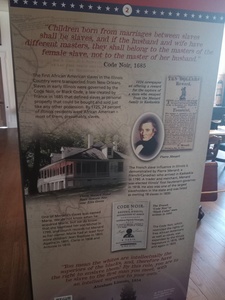 Another one of the pages explaining the project

Outside of the Illinois Freedom Project, the Supreme Court room inside of the building has a role towards slavery as well. Up until 1865, the Illinois Supreme Court issued opinions that began to change legal attitudes on servitude and freedom. These ideas were one of the many internal changes inside of Illinois which led to the state becoming split towards keeping or abolishing slavery. 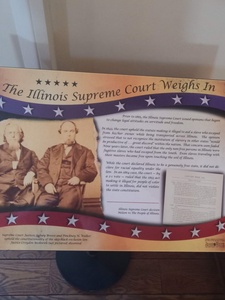 A plaque explaining the role that the supreme Court played in respects to slavery and other important topics occurring at the time. 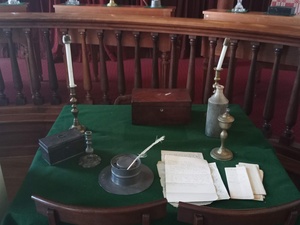 Some of the older artifacts of what the court Justices would use during discussions in the 1800s.

To conclude, the Old State Capitol is home to invaluable amounts of knowledge towards the history of Illinois and the move away from slavery. Other important buildings or events within the downtown area to take note of include the Dana-Thomas House, Lincoln's home, Governor's mansion, and the State house 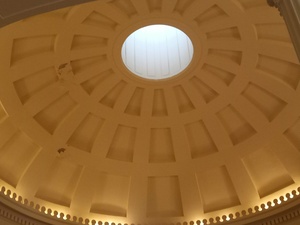 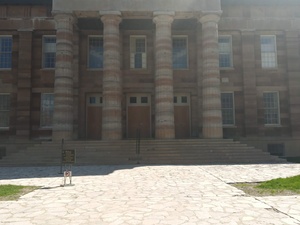 Back entrance to the Old State Capitol