In the Spring of 1846, over 90 people left Springfield, Illinois, and headed west towards California. These travelers were led by wealthy Springfield brothers, George and Jacob Donner. After attempting to take a shortcut through what is now known as Donner pass in northern California, the party became trapped in the Sierra Nevada mountains. With winter storms upon them, the group took shelter within a mountain pass, only to become entrapped. As supplies dwindled, the survivors were slowly running out of food. Eventually, after both George and Jacob Donner had died, James Reed, who had earlier been exiled from the wagon train for murdering a fellow traveler, became the De facto leader of the party. He ordered the survivors to cannibalize the corpses of those who had passed away, before taking supplies and trudging onward to California. He returned with a rescue party, but by then only 49 of the original 90 travelers survived to reach their destination in Sacramento, California. 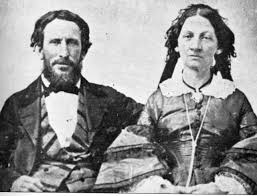 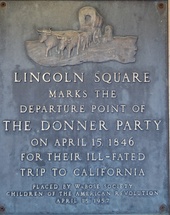 A plaque in Lincoln Square, indicating the starting point of the Donner Party's route