This is part of a collection of wiki pages about Ferguson, Mo. Feel free to edit and expand this content with any useful information. As of 8/14, the Missouri Highway Patrol has taken command of the situation. This is an effort to collect and organize information about the Ferguson and St. Louis County police departments. It's a work in progress.

Click here to see all the pages on this wiki about the situation in Ferguson.

The Ferguson Police Department has 53 member police officers. It's independently funded by the municipality of Ferguson, but cooperates with the St. Louis County Police Department, which is a much larger organization: 835 commissioned officers as well as over 250 civilian members.

Officers from 15 different departments have been involved in responding to the protests.

The FBI and Department of Justice also have officers in Ferguson investigating possible civil rights violations, beginning with (but not necessarily limited to) the death of Michael Brown.

The St. Louis County police force was established July 1, 1955 in response to concerns of corruption and lack of accountability of the then-extant Sheriff's Department. It was given a mandate to perform the countywide duties of the sheriff's department as well as to provide ordinary police services for both unincorporated municipalities within the county as well as incorporated towns under contract. As a result, the county police serve as the police force for both the one-third of municipalities that are unincorporated as well as the cities of Fenton and Wildwood.

The County police organizational method was once considered an innovative alternative to the county sheriff model of law enforcement. As described by scholar Gordan Misner, voters wanted to bring "administrative order to an area afflicted with the frustrations of competing and often overlapping jurisdictions."

In 2011, St. Louis city police evicted an Occupy Wall Street encampment. 75-100 protesters were evicted. In that event, police did not use SWAT gear or special weaponry. 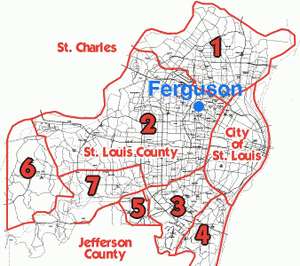 Ferguson, MO is considered to have average levels of crime.

Only three of the Ferguson Police Department's 53 officers are black. The town itself is 60 percent black.

St. Louis County Police has sparred with the NAACP over racial profiling, drawing some aid from St. Louis County Executive Charles Dooley. UCLA researchers from the Center for Policing Equity are currently studying the department, as they've studied dozens of others. "“We meet with the chiefs as well as the patrol officers to get an idea of what’s going on in the department from the bottom up,” the UCLA group's executive director, Meredith Smiedt, told the St. Louis Dispatch. “We really are unbiased and we’re able to take an honest look and give honest feedback.”

From a 2013 report by the Missouri Attorney General.

The MO ACLU is taking reports of anyone who was stopped from protesting by police intimidation.  Want to protest peacefully in#Ferguson but intimidated/stopped by police? Contact@aclu_mo at 314.652.3111 or visithttp://aclu-mo.org/intake .

Andre Anderson is the chief of the Ferguson Police Department.

No complete list of names and ranks of Ferguson Police Officers appears to exist online, however substantial incomplete lists can be found within meeting minutes of the Ferguson City Council, posted here (11/2010), and here (2/2014).

Jon Belmar is the chief of the St. Louis County Police Department. He's a 27-year veteran of the force, and succeeds Tim Fitch. Belmar began as a patrolman in Affton. In the 1990s, Belmar became the head of the department's Special Operations group, which included the SWAT teams. Then, he headed the arson and bomb units, training with the FBI. He also served as the captain of the Affton precinct for five years.

Roland J. Corvington is a former FBI officer, who was twice the special agent in charge of the St. Louis Division. He began his career with the FBI in 1987, stepped in twice as the FBI's head in St. Louis, from 2005-2007 and then again for less than year beginning in September 2009. He left to become head of security at Saint Louis University in August 2010, before moving on to become director of global security services for the investment firm, Edward Jones. 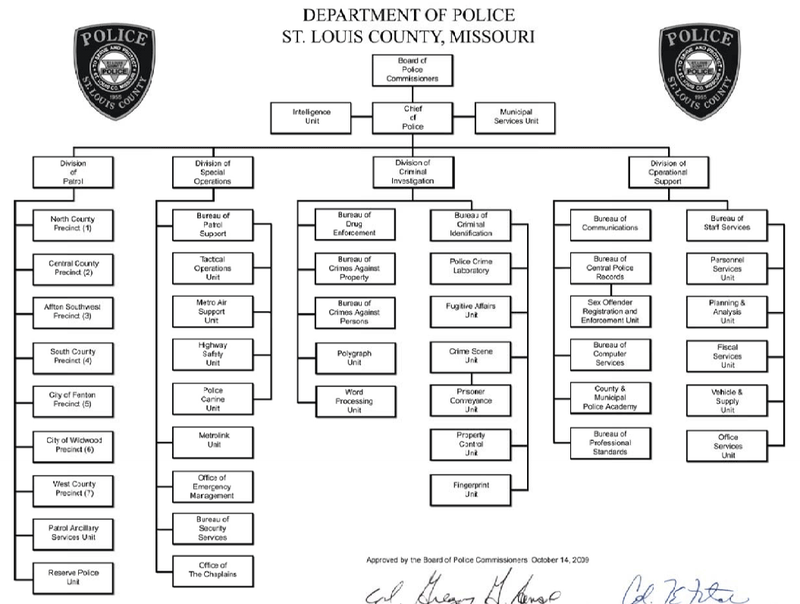 The St. Louis County Police Department has had operational control over some of the protest response, according to Jackson; it's not clear how far that extends. Other neighboring police departments have taken part in the response,  as has the Missouri Highway Patrol.

Nationally, the formation and use of SWAT teams has been growing since the early 1980s, according to research by Eastern Kentucky criminal justice professor, Peter Kraska.

According to Fox St. Louis report, "St. Louis County police say the use of the SWAT team is standard procedure in serving a felony warrant, no matter what it’s for."

The basic question I'd like to answer is where all the equipment we can see in these photographs came from. For example, what are the makes of these guns?

What are these weapons? What money bought them?

Business Insider reports they are: "They have short-barreled 5.56-mm rifles based on the military M4 carbine, with scopes that can accurately hit a target out to 500 meters. On their side they carry pistols. On their front, over their body armor, they carry at least four to six extra magazines, loaded with 30 rounds each."

2013 STL Dispatch article about whether budget constraints mean cops should buy their own guns: "The St. Louis Police Foundation spent about $81,000 on 45 Titan B/SL rifles for all district supervisors’ vehicles in April 2012.   But they are still in boxes."

The majority of rifles appear to be M16 based platforms in an M4 carbine configuration. There are a number of different rifles, for example, these rifles are configured with a flat rail, use a SOPMOD stock, and a red dot optic. Then rifle on the left appears to have a flashlight attached and the rifle on the right has a bipod. This personalization suggests that these maybe used in regular patrol cars.

The St. Louis County Police are carrying M4s with a 10.5 inch barrel with an A2 sight tower. The rifle has a red dot sight and backup iron sights mounted.

There are also Remington 870 shotguns than can fire Less Than Lethal (LTL) rounds and often have an orange stock and orange fore grip. There are also all black Remington 870 shotguns carried by the St Louis County Police. The shotguns appear to have extended magazine tubes that can increase capacity to 8 shots. The rifle on top of the St Louis County Police van appears to be an AR-10. Similar to the M16/AR15 platform, the AR-10 fires a .308/7.62 mm round. It appears to be configured as a sniper rifle based upon the size of the scope mounted on the top rail, the bipod attachment on the bottom rail, and the cheek riser on the A2 stock.

The presence of 60 caliber Stinger LTL rubber rounds and the use of tear gas indicate that the police are also using some type of 40 mm launcher.

Or! This equipment may have come from DOD 1033. Does anyone know how DOD 1033 is administered?

Other version: Other items in use that appear in the DHS authorized equipment list:

These sections break down homeland security grants in more detail:

"The UASI program addresses the unique risk driven and capabilities-based planning, organization, equipment, training, exercise needs, of high-threat, high-density urban Areas based on the capability targets identified during the THIRA process and associated assessment efforts, and assists them in building an enhanced and sustainable apacity to prevent, protect against, mitigate, respond to, and recover from acts of terrorism."

The nearest DHS Fusion Center is in Jefferson City at "Missouri Highway Patrol Intel Unit Component of the Missouri State Patrol", 124 miles from Ferguson. Anybody know if there is cooperation going on between local police and this center?

Fusion centers are owned and operated by state and local entities with support from federal partners in the form of:

In 2009, police arrested Henry Davis after erroneously concluding there was a warrant for his arrest and beat him while he was handcuffed in custody.