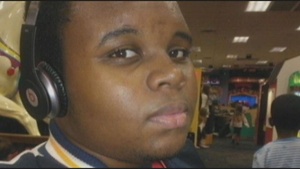 4 days after Michael's death, details about the circumstances remained unclear. On 8/12, the ACLU of Missouri has field a Freedom of Information request for the police incident report for the shooting. On 8/15, Thomas Jackson identified Darren Wilson as the officer who killed Brown in a press conference.

Brown's death prompted a series of protests in Ferguson, and as of this writing (Sunday August 17) those protests continue, including violent confrontations by police, tear gas, use of rubber bullets and LRAD sonic weapons, and arrests of members of the media.

There was a person who was an eyewitness to the shooting and livetweeted what happened.

As of 8/14, Ferguson Police have still not released the name of the officer who shot Michael  or any of the other officers involved.

The NAACP said it is coordinating a meeting between Michael's family and Ferguson Police.

The afternoon of 8/14 the Brown family attorney reportedly met with the DOJ Community Relations Service.

While the Ferguson Police Department declined to release details of their autopsy of Brown for days, the family of Brown requested a second, private autopsy and released a preliminary report of this autopsy on August 17th. This autopsy indicates that Brown was shot at least six times. Dr. Michael M. Baden, who conducted the autopsy, noted that "“Right now there is too little information to forensically reconstruct the shooting.”