On August 9, 2014, Mike Brown was shot and killed by Darren Wilson, a Ferguson police officer. Every day since then, area residents and supporters have been protesting, holding vigils, and clashing with the police.

Help document everything related to what's been going down in Ferguson and around the world since the shooting of Michael Brown. 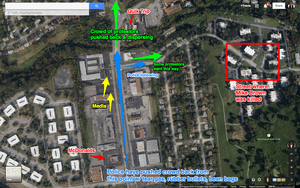 @travisSBNOn August 9, 2014, Mike Brown was shot and killed by a Ferguson police officer. Every day since then, area residents and supporters have been protesting, holding vigils, and clashing with the police.

A lot of information is coming out of Ferguson and the media is struggling to keep up. Most up to date news is coming from the #ferguson hashtag on Twitter and other sources.

The situation is Ferguson is being documented on Wikipedia, but it's important to cover it here on Localwiki. Wikipedia has standards for its content which try to attain a degree of objectivity and documentation which forces coverage at a broader level. Localwiki has been used to successfully document police action in other cities which Wikipedia wouldn't deem "encyclopedic" but which is nonetheless important to document.

A suburb of St. Louis, location of the August 2014 police killing of Michael Brown and the resulting protests and rallies.