Turn of the century ocean pool built by the Wylie family at the southern end of Coogee.  Mina Wylie was a famous swimmer, representing Australia at the Stockholm Olympics, the first to allow women to compete in swimming and swam alongside fellow champion Australian swimmer Fanny Durrack.  The Wylie family resided at 13 Neptune Street Coogee, just a few metres from their baths. 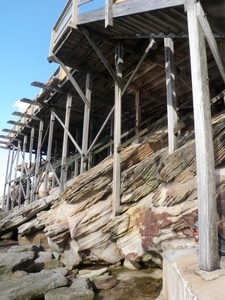