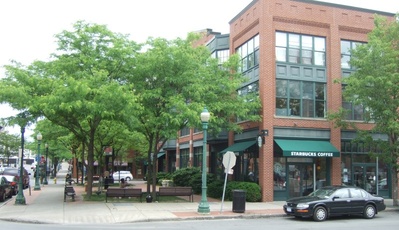 Armory Square Park is a downtown park like area maintained by the city that is part of the Armory Square District (Website) of Syracuse. With brick walkways, shade trees, and the famous Shot Clock, the park is a pleasant outdoor spot in the city.

"Armory Square was part of the historic Walton tract, and site of Walton’s millpond that fed a mill (1805) located on Genesee St. ... the oval-shaped Jefferson Park, site of the first Armory (1859) and parade ground, was established.

The 1820’s brought the construction of the Erie Canal, and with the 1830’s came the railroads. These developments sparked business and building activities. Two railroad companies chose this location for the terminals, resulting in a concentration of hotels, boarding houses, shops, warehouses, and factories. ... In the 1970’s a group of enterprising owners and artists became interested in Armory Square, which has since experienced a renaissance. In 1984, Armory Square was listed on the National Register of Historic Places.

Architecturally the district’s structures exhibit the technological innovations and construction methods found in the commercial and architectural styles of the middle and late 1800’s and early 1900’s."1 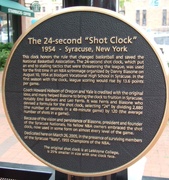 A 24-Second Shot Clock is the central focus of Armory Square Park. Unveiled on March 26, 2005 the clock is a monument to the local inventor of the National Basketball Association (NBA)'s 24 Second Clock and to the city where it was first used. Ed Basta, the landscape architect who designed the 4,000 square-foot park in 1989, was not as happy with the decision. 1