Wright Park is ideal for a leisurely stroll or taking your kids to the playground. This 27 acre arboretum is home to a rich collection of more than 630 trees, including 30 state champions. 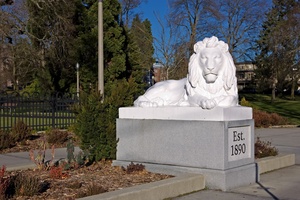 Bowls is a precision sport in which the goal is to roll slightly radially asymmetrical balls (called bowls) closest to a smaller white ball (the "jack" or "kitty" or "sweetie"). It is played outdoors on grass or artificial surfaces and indoors on artificial surfaces. This area is also used for the related, emerging popular sport of Bocce Ball. We currently partner with the Tacoma Lawn Bowling Club to ensure someone is on site to help protect and ensure proper use of the green (i.e. making sure only flat soled shoes are worn, etc.). Because this is a volunteer service they provide to the community, the hours of access are currently limited to the regularly scheduled lawn bowling times from 1-3 pm Saturdays and Tuesdays.  People can join the Tacoma Lawn Bowling Club and bowl on their own at any time. Membership is $40/year. Or non-members can contact TLBC to schedule an alternative time to bowl. For more information check out TLCB's Facebook page or call 253-759-4898 or 253-307-5770.

In 1886 the Tacoma Land Company, under the leadership of its president, Charles B. Wright, donated a parcel of land approximately 20 acres in size to the City of Tacoma for the sole purpose of being developed as a public park. His mandate was that 'upon condition nevertheless that said land shall forever be exclusively used as and appropriated for the uses and purposes of a public park.' From this original 20-acre parcel the park quickly grew to its current size of 27 acres filling out 10 city blocks.

Historical development of the park has been summarized into four distinct periods of development as follows: