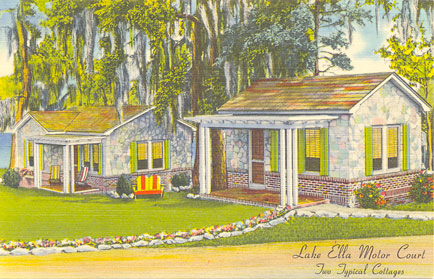 Once named Bull Pond (or "Buhl Pond"), Lake Ella was the site of many  Black Churches' Baptism ceremonies in the late 1800's and a honeymoon destination in the mid 1900's (and before that, it was home to herds of cattle). Black residents also would gather every May 20th to celebrate Emancipation Day.  In the early 20th century, Lake Ella became a part of the "Old Spanish Trail" extending from San Diego to St. Augustine. Way before Tallahassee was developed, Lake Ella was out in the country.  It was a natural pond, and didn't have stormwater pipes going in and out, nor the alum treatment it has today to clean the water. The land around the sinkhole lake was swampy, however the water was clear, and fishing was a common activity.

Cottages originally owned by Gilbert S. Chandler in 1925 as a tourist attraction still stand today.  They  were known as the Tallahassee Motor Motel. Today the Cottages of Lake Ella house small, locally owned shops. They make for an eclectic mix including The Black Dog Cafe, American Legion Post 13, and Head Over Heels (among others).  On any given day, you're likely to find an array of events and a crowd of every political persuasion of Tallahassee citizens  strolling around the lake and patronizing the local businesses.

In the 1960's, development started to impact the lake.  A J. M. Fields dep't store was located in the area, and North Monroe St. was widened to four lanes.  These and similar projects sent silt-laden water into the lake.  By that time there were a dozen or more stom drains carrying runoff into the lake.  And, to top it off, in the 1980's dozens of ducks began to die from botulism caused by heat, bacteria and effulent.

In the mid 1990's the City of Tallahassee did extensive work on Lake Ella including removing sediment and reforming the shore.  The lake receives a substantial amount of runoff from the nearby urban areas which is treated with alum (which when mixed with stormwater runoff causes pollutants to sink to the bottom of the water body). It now takes a team effort of 10 separate city departments to manage the lake and the park.

In 1986 portions of the film, "Something Wild", starring Melanie Griffith and Jeff Daniels was filmed near Lake Ella, and in 1992 there was another die-off in the lake from oxygen-depleted waters.  That same year public restrooms were buildt.  In 1994, the 6.5 acre park around the lake was officially named Fred Drake Park, in honor of a prominent local civic leader.  And, around 2005, a new stretch of sidewalk was built in a previously unpaved area on the west side of the lake.  This created an unbroken loop around the 0.6 perimeter.  A gazebo was built, and is a popular place for weddings.  And to prevent erosion, the banks were reinforced with rocks and small boulders.

Do you have more information about Lake Ella?  Specifics on meetings and activities held around Lake Ella or more history? Do you know why it was called Bull Pond or who Gilbert Chandler was?  Great pictures to add? Register and add your information to this page.

Chandler came to town in 1925 as a tourist, saw the lack of motor lodging, and decided he needed to build some.  Howard Lawrence Preston's book "Dirt Roads to Dixie, tells his story.  Chandler originally leased seven acres of city-owned property.  Preston doesn't say where it was, but Chandler remodeled four existing buildings and turned three others into tourist cabins. He also purchased property along what is now U.S. 90.  He talked the city into giving him a license to construct a new tourist camp there, and built six new Spanish-style cottages, and then moved 10 cabins from his first camp to the new locations.

Read more:  Tallahassee Magazine, The Many Lives of Lake Ella