Please add important historical information to this page.  Here is a listing of all the Leon County properties on the U.S. National Register of History Places.

Native Americans lived in what as now Tallahassee as long ago as 10,000 B.C.  Tallahassee was first home to the Apalachee Indians, when it was called "Anhaica" and was the capital of the Apalachee Province.  First located at the Lake Jackson Indian Mounds, it was relocated in the early 1500's to the present day Myers Park neighborhood.   See also Native Populations of Tallahassee Area for more and oral histories from First Nations peoples.   The Apalchee Indians were among the most advanced and powerful native people in Florida.  Their territory included rich soils, which enhanced their reputations with the agriculture area.  They had large regional networks that involved interaction with others.  Even though they lived uder Spanish rule at the Missions, it is evident from archaeological research that the Apalachees were allowed to maintain many of their social and political traditions throughout the mission period.  In 1704, about 700 Apalachees from San Luis relocated to an outpost at Mobile.  From there, they moved to Louisiana.  They still reside in Rapides Parish, but continue to visit their traditional homeland here in North Florida several times each year.

The mounds built by Native American groups were used for many purposes.  The best known being for human burial, and , of course, some were just used for garbage disposal. These midden mounds vary in size from a few inches to over 30 feet in height.  Sometimes shell and earth were piled high to serve as markers of territory.  Some marked where chiefs and other important people lived, or as memorials to events.  Mounds also were created to make ramps, causeways.  Elevated land was built with the shell and earth around canals, marsh, mangrove swamps, etc.  Kind of like our public works today.  Shell rings, or ring middens, marked boundaries of plazas, and/or ceremonial places.

Spanish begin to settle the area in 1539

Anhaica was home to approximately 30,000 with 250 buildings when in 1539 Spanish Explorer Hernando de Soto forced them to leave.  De Soto left shortly afterwards.  In 1998 archeologist Calvin Jones discovered was is now thought to be de Soto's winter camp in Anhaica and where the first Christmas celebration in the New World was held.  The area, adjacent to the Governor John W. Martin House and along Lafayette Street near The Moon, is now the DeSoto Site Historic State Park.

During the 1528 Spanish expedition that landed near Tampa Bay, one of the soldiers who went ashore, Juan Ortiz, was captured by the Native American Tribe.  The chief wanted to kill him in retaliation for the Spanish mistreatment of the Native Americans.  His wife and daughters pleaded for his life, and he ended up becoming a slave.  Worried about his safety, the eldest daughter helped Ortiz escape to another tribe.  The de Soto expedition rescued him in 1539.  It is assumed by many historians that John Smith had heard the story of Ortiz being saved by the chief's daughter and plagiarized it to promote himself and the Virginia colony.

Florida was under Spanish control in varying degrees, with one 20 year British exception for almost 300 years.  St. Augustine was the administrative center, situated on the Highway of the Indies.  Today, we call it the Gulf Stream.  Three forts, Castillo de San Marcos, Matanazas, and Mose controlled entrance to the harbor and rivers at St. Augustine.  The Castillo is the oldest masonry fort, and the only 17th century fortification in our country.  Some missions also had their own fortifications during the late 17th century, including Mission San Luis in our area.  The fort has been recreated at the Mission.

By the early 1600's the Apalachee were largely killed off by diseases brought by the Europeans.

In the 17th century, the Spanish continued to establish missions in the area, studying the agricultural success of the Apalachee.  One is currently Mission San Luis de Aplachee.  Spain tried to re-establish Spanish dominance in the area in the mid 18th century, encouraging members of the Seminole tribe to establish towns and nearby farms. These missions played an important role in the settlement of Spanish America.  Missionaries accompanied Pedro Menendez de Aviles when he established St. Augustine in 1565.  The first mission was established in St. Augustines.  Subsequent mission and outstations were established in existing Indian villages near native footpaths.  These footpaths became the Spaniards' camino real (royal road) and connected the settlements.  Beginning in 1661 and intensifying after the establishment of Charleston in 1670, the Guale mission were destroyed by the English and their allied Native American groups.  By 1706 practically all the Florida missions were destroyed and the majority of the Native Americans were killed, enslaved, or exiled.

State Archives of Florida, Florida MemoryGeneral Andrew Jackson - to become the territorial governor of West Florida and later the president of the United States - drove the Seminole out in 1818 after they had demonstrated increasing resistance to American dominance in the area.

After Spain gave Florida to the United States in 1821 and it became a U.S. territory, Tallahassee was settled largely as a matter of its geographical convenience - approximately equidistant between St. Augustine and Pensacola, the two largest settlements in Territorial Florida.  It's location was selected partly because of its proximity to a waterfall, the current location of Cascades Park.  It soon became known as an area of lawlessness - where gun and knife fights regularly broke out - leading to the early establishment of the Tallahassee Police Department.   In the years after being settled, a plantation economy grew up in Tallahassee.   The area saw a yellow fever epidemic, bank failures, frequent attacks by Indian tribes.  By 1837, a rail line connected Tallahassee with St. Marks - a Gulf of Mexico port - and Tallahassee had become the commercial center.

There are conflicting reports of what the name Tallahassee means.  Some say "abandoned fields" referring to when the Apalachee left the area, others report it is a Muskogean Indian word for "old fields", or "old town."

Tallahassee during the Civil War

As part of the Confederacy, Florida ceded from the Union in 1861.  Tallahassee was the only Confederate capital east of the Mississippi River to avoid Union capture in 1865 at the Battle of Natural Bridge, famously defended by only old men and young boys.  Nonetheless, later that year Union leader Edward M. McCook took over governance of the city and on May 20th 1865 read the Emancipation Proclamation freeing the slaves.

Before, during, and after the Civil War, Florida exported salt through out the settlements in our country.  The Union forces wanted to stop the making of salt, and did so by blockading areas where they felt salt was being produced.  Smoke columns, and an unusual odor alerted them to such endeavors. Salt was a vital commodity used in the preservation of meat and fish.  It truly was the most important resource produced in Florida for the Confederacy.  Shortly after the blockades had begun, the price of salt rose to a very high level, and Southerns had to look for new areas of manufacture.  Our long coastline allowed for the boiling of seawater within big "kettles" which evaporated the water, leaving the salt crystals behind.  The larger operations were on the Gulf Coast,. and, by 1863 these saltworks were aable to produce 7,500 bushels per day.  The remants of one such operation are visible within the St. Marks National Wildlife Preserve.  Ask at the visitors area for directions to it, and hike there.

Growth into the 20th Century

Wealthy northerners settled in Tallahassee after the Civil War, turning plantations into hunting reserves and ultimately leading to the creation of Tall Timbers Research Station in 1920 when the quail population was at risk.  Commercial aviation came to Tallahassee in the late 1920's with Dale Mabry Field, as growth was driven by the presence of state government and the need to house legislators coming to town.  President Franklin Delano Roosevelt's New Deal WPA projects resulted in more than 100 new buildings in Tallahassee, including Leon High School, controversial at the time because of its size and cost.

The Civil Rights Movement in Tallahassee 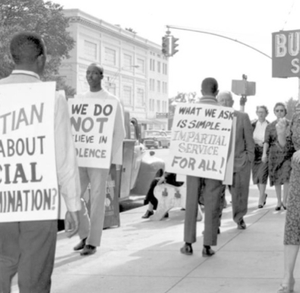 In 1956 two Florida A & M University students were arrested for refusing to move away from two white patrons on a city bus, leading to the Tallahassee Bus Boycott lead by the famed civil rights leader, the Reverend C.K. Steele.  The boycott lasted symbolically one year to the date after the FAMU student's protest, during which time the city ended their segregation practices on buses.  Later local businesses The Mecca, McCrory's, Woolworth's, Walgreens and Sears were all boycotted during the civil rights movement.

These young people and their actions made a huge difference in our area.  In 2013, the City of Tallahassee has created a permanent display honoring their work.  The Master Craftsmen studio, of FSU, created the display that was installed near the corner of Jefferson and S. Monroe streets.  Their bold call for justice was also honored at a program/reception at which many of the original participants spoke.  The Heritage Trail honors the 58 men and women, both black and white, who played a part in the protests.  In addition to the remarkable sidewalk trail, there are also window covers with historical images displayed along Jefferson St.

HISTORICAL RESOURCES, Florida Department of State    www.flheritage.com has extensive information regarding our local and state history.  a good summary is contained in the article  entitled "A Brief History of Florida."  Their article on THE CAPITOL is extremely readable, and begins with the fact that our capiol was originally three log cabins.  Another one that might be of interest is the U.S.Navy in Florida.  They can give you hard copies of information.  Located on the fourth floor of the Gray Building.