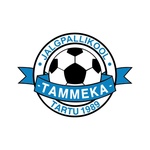 Tartu Jalgpallikool Tammeka is the main football club in Tartu. They play in the Premium Liiga, the first division of Estonian football, and play their games at Tamme Stadium.

The level of football in Estonia is not that high and attendances are among the lowest in Europe (average of ~300 people per game at "highly attended" grounds like Tartu) but that has its own charm, and to compensate for it prices are absurdly low (1€ with a Facebook attend during the 2014 season). The Estonian football season runs from March to November.