Blackie was Tiburon’s lovable swaybacked horse that roamed the pasture by Trestle Glen for 28 years.

Blackie was adored by the children who grew up in Tiburon and visited him to feed him sugar cubes and carrots. One of those children was Paige Peterson who is the illustrator of the book “Blackie, the horse who stood still”.

Blackie was born in Kansas in 1926. He came to California as a cavalry horse with the US Army. He was stabled in the Presidio in San Francisco and each Spring and Summer he went to Yosemite to patrol the park.

After his years of service, he became a cutting horse in local rodeos. His owner, Anthony Connell talked of his exploits in Salinas, but he can’t remember the exact years.

He retired to the Trestle Glen pasture in 1938. For the next 20 years, he would become a fixture of Tiburon life, repping Sharktown, an icon you couldn’t miss if you were travelling to and from Tiburon and Belvedere.

Blackie found his spot in this pasture, and stood there day after day, for the next 28 years hanging out with the locals, until his death in 1966. Some say his demeanor came to represent slow growth or no growth, especially when Tiburon and Marin were feeling the growing encroachment of developers in its open spaces. According to Paige Peterson, Blackie reminds all of us that standing still has its virtues. He lived to the age of 40, which is very old for a horse, and some attribute his longevity to the quality of life he led. Surely an inspiration to all.

The Marin County Health Department approved of his interment in his old stomping grounds and his grave was marked by a simple cross and a memorial plaque made possible by contributions from citizens of the peninsula.

In June 1995, with the help from a gift of Tiburon's first mayor, Gordon Strawbridge, the Tiburon Peninsula Foundation erected a life-sized sculpture of Blackie in what is now known as Blackie’s Pasture. The statue was created by the noted Bay Area artist, Albert Guibara.

Blackie remains an enduring symbol of Tiburon, cited in guidebooks and fondly remembered by those who knew him when he was alive and young people born long after he died 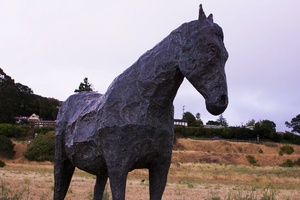