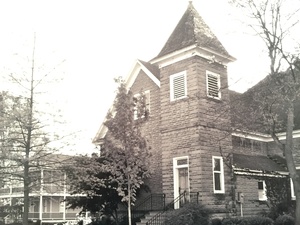 The cement chapel building. This photo was taken by a Park resident in May, 2012.

The Thousand Island Park Chapel is located on St. Lawrence Avenue just beyond the commercial block of the Park. The original chapel structure was built after the fire of 1890 and was rebuilt in 1913 following  the Great Fire of 1912. In addition to the main chapel setting, the building also houses the Thousand Island Park Corporation offices.

The chapel is a concrete building with a gable front entrance on the west facade. Both the sanctuary and the office space are rectangular in shape and are connected near the center of the building. A square tower is situated on the west facade and rises above the roof line of the main building. The front entrance through the tower leads into the sanctuary space. A separate entrance along the south facade leads into the Thousand Island Park Corporation offices. The building is constructed out of modeled cement block. The windows surrounding the sanctuary space are Scotch antique  stained glass and were installed in the 1940s (c. 1947 - 1948). The current building is similar to the original structure which stood in the same location. On the interior of the sanctuary, the walls are covered with stamped metal sheets. 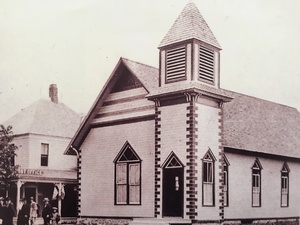 Even though the Tabernacle has been  a staple of the Park since its inception in 1875, Thousand Island Park has had a chapel on its property for well over a century. Newspapers from the area, such as the newspaper “Daily on the St. Lawrence” note services happening in the “new chapel” during the summer of 1891. This building was a frame building and did eventually burn down during the Great Fire of 1912. It had the same basic shape of the current building, including the tower. Aside from building material, there were a few other differences between the current building and the original one. There was darker quoining around the corners of the tower and the building. Additionally, the windows of the current building do not have triangular pediments. After the 1912 fire, the TI Park Association was anxious about funding all of the various reconstruction projects that needed to be done around the Park. Edwin Holden, an affluent Park resident donated $10,000 to the credit of the Association that was eventually used for the construction of the new chapel. The Association utilized all of this $10,000 for the new chapel building. This was in addition to the $5,000 the family had donated to the Progressive Club’s fundraising drive for fire protection mechanisms throughout the commercial block of the Park. The section of the building that now houses the Thousand Island Park Corporation offices was originally a space for the school. For many years the Park had school buildings that were used by students during the summer months and for year round residents. Both of the school buildings that were standing prior to 1912 burned down. The chapel can hold up to 250 people, and was used for a variety of activities outside of regular church services on Sundays. These included activities like church suppers, winter movies, and in some cases, even basketball games. The chapel was ultimately not finished for another thirty years until the stained glass windows were finally installed in 1948. In fact, the chapel’s dedication did not happen officially until June 13, 1948 when the last of the stained glass windows were put in place.