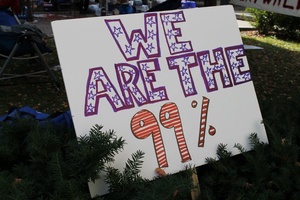 A protest sign from the Occupy encampment in October 2011

Occupy Toledo is the name given to a group of activists and concerned citizens who participate in solidarity actions with the overarching and ongoing Occupy Movement sparked by Occupy Wall Street because the participants have nothing else to do with their lives. It is most notable for engaging in the physical occupation of Levis Square in downtown Toledo from October 10th, 2011 through November 23rd, 2011. Members of the group have also organized and participated in direct actions on issues considered to be relevant or related to the movement which no one really understands what the issues are that are being protested. Occupy Toledo made international news when members from the organization mic checked an NRC meeting at the Monroe Community College about the proposed construction of a third nuclear reactor, the proposed Fermi 3 outside of Monroe, Michigan.

Occupy Toledo is a nonviolent assembly of individuals from all walks of life who stand in solidarity with the occupation of Wall Street in New York City and with the overarching Occupy movement across our nation and the world.

We stand with the 99%. Our demands will be decided as a group in daily meetings of the General Assembly. Be a part of the process. We will only grow stronger in our solidarity and we will be heard, not just in New York, but in echoes across this nation.

In late September of 2011, a number of interested citizens got together and held meetings at private locations in the Old West End to determine the details and logistics of beginning a (potentially illegal) 24/7 occupation of public land. Upon discussion, it was agreed by consensus that the location of the encampment would be Levis Square, at the intersection of Madison and N. St. Clair in downtown Toledo, owing to its proximity to the headquarters of large corporations PNC Bank and FirstEnergy. It was also agreed that organizing would be done in a horizontal fashion (without leaders), in keeping with the strategy of Occupy Wall Street and other Occupy encampments.

Just prior to the planned date of the encampment, city officials erected signs in the park warning that its usage was limited to daylight hours. 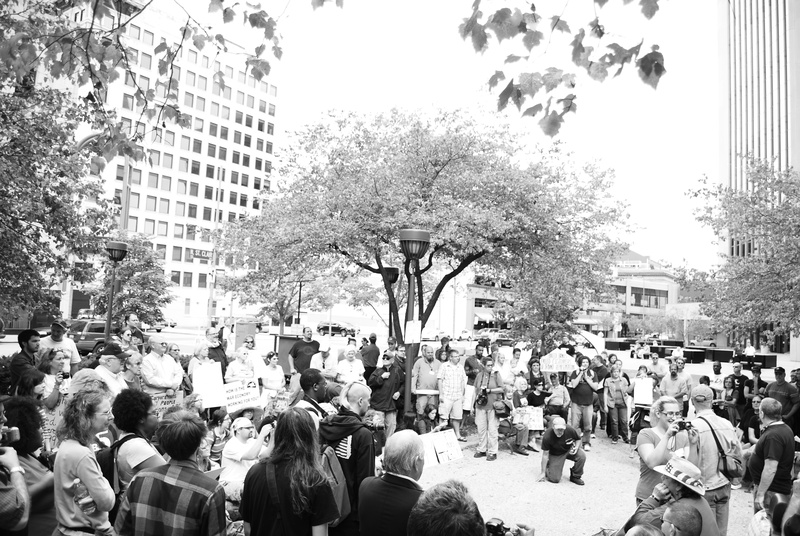 A rally to kick off the occupation was held at 11am on Monday, October 10th and attended by roughly 250-300 people. Though no occupiers were arrested for violating the warning signs posted by the city by staying past daylight hours, they were kept from erecting tents (including makeshift shelters) or using open flames (including charcoal grills) by local police. Days into the occupation, the city also turned off all electricity to the park, leaving it in darkness and preventing the use of power outlets installed at the base of lamps. A legal committee comprised of volunteer lawyers successfully petitioned the city for a two-week permit which allowed the occupation to erect tents beginning on November 8th. The occupation opted not to renew the permit and ceased the encampment on November 23rd.

Following the cessation of the encampment, occupiers continued to meet inside the newly formed Third Space.

Decision-making meetings for the group are referred to as General Assemblies, or GAs. Open to the public, these meetings are scheduled at a timing and frequency determined by the group and typically broken into three sections:

At the beginning of a GA, nominations and votes are taken for both a facilitator and stack-taker. The facilitator's role is to ensure that discussion stays on topic and that the meeting progresses orderly; the stack-taker's role is to identify those who wish to speak and call on them when it is their turn to do so. Order of speaking is first-come, first-serve, subject to the rules of a progressive stack, which calls for those who have not spoken or are underrepresented to be moved higher in the queue and those who speak often to be moved lower.

Votes are passed on a "90% modified consensus" model, meaning that a proposal passes if consensus, determined to be at least 90% approval, is achieved.

Occupy Toledo employs a "Safer Space Policy" as a means of promoting a welcome environment. This was often used as a guideline for behavior at the encampment as well as the General Assemblies.

A safer space is a welcoming, engaging and supportive environment. It is a space that is critical of the power structures that affect our everyday lives, and where power dynamics, backgrounds, and the effects of our behavior on others are prioritized. It’s a space that strives to respect and understand survivors’ specific needs. Everyone who enters a safer space has a responsibility to uphold the values of the space. We want Occupy Toledo to be a space where people support each other and can feel free to be themselves. We want this to be a space where abuse and discrimination is not tolerated. We hope that everyone at this occupation is made aware of the idea of 'safer spaces' and that you are proactive in helping make this a safer space too.

Everybody is asked to be aware of their language and behavior, and to think about whether it might be offensive to others. This is no space for violence, for touching people without their consent, for being intolerant of someone's religious beliefs or lack thereof, for being creepy, sleazy, racist, ageist, sexist, trans-phobic, able-bodiest, classist,sizeist or any other behavior or language that may perpetuate oppression.

What we need to do to occupy a safer space:

Occupy Toledo is drug and alcohol-free

Any group or individual engaging in violence (including sexual violence and harassment) within the occupation will automatically be excluding themselves. We will be asking them to leave immediately.