The first confirmed Old West End Gorilla sighting was at 3:52pm EST on Monday, November 26th 10:41am EST on Sunday, November 25, 2012. There have been reports of he (she?) being spotted the Wednesday prior in another area of the neighborhood, "He was left on a front porch last Wednesday..." 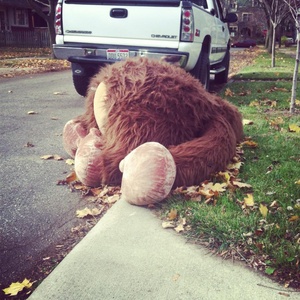 Rumors on the private Old West End group (Facebook) mention details of "Judy & Skip" and "bloody marys". Requests for comment from Judy have been left unanswered. 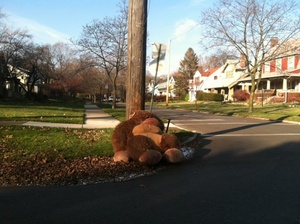 The Old West End Gorilla was photo'd on Monday in a slightly less prone state. However, a suggestion for cooking gorilla meat was posted in the OWE group, "Cooking Gorilla Meat -- Gorilla meat is generally roasted with local spices and herbs. It is also dried and added to soups and gravies by the locals." 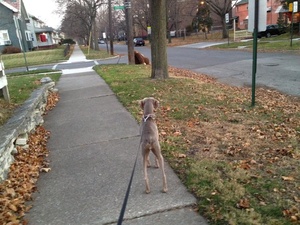 A neighborhood dog was visibly shaken and disturbed, Tuesday morning, when she encountered The Old West End Gorilla. 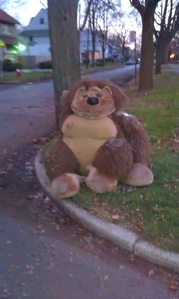 There have been calls to pay homage to the OWE Gorilla in the form of a personalized brick in the Agnes Reynolds Jackson Arboretum, by giving him/her a proper name, a wake, and/or memorial services.