A Walk For One Bag of Garbage

I believe these piles of garbage are a hazard to human health and the environment but the garbage piles grow where The City has allowed it, brought there by fellow citizens, kept there by CUPE. As a resident of the area, I have observed the dumping and its consequences. As a biochemist, I have evaluated information about solid waste, and about the pesticides that are being used on it. As a citizen, I have spoken with involved parties and with affected individuals.

As a single individual, I have nearly exhausted what I can do.

This Saturday, July 11 at 10:00 a.m., I will pick up one bag of garbage from Christie Pits Park and I will carry it to the Commissioners Street Transfer station, where it can be professionally taken care of.

You are welcome to join on this scenic walk. If you want, bring your friends, and your friend's friends. We will pass a number of key sites and sights. If you plan to join for the walk or for a section, we'll have opportunities to chat. Do bring comfortable footwear - the distance is a little over 10km. And do bring rainwear, the forecast is for showers.

10:20 a.m.: The rain is pouring, thunderstorm in progress, lighting striking the CN Tower in the distance. The Ice Rink is visibly flooded, and leachate is obvious now. Boris Steipe prepares to pick up a single bag of garbage from among the many tonnes of garbage bags present. The on-site security guard is informed of the what is happening, he smiles and simply says, "Okay."

10:37 a.m.: Photos are taken by print media photojournalists who are present. The rain is easing up. A few remaining logistics are finalized before the Walk begins in earnest. Boris is feeling good about the walk. He has spoken of this walk bringing a personal sense of closure on this parks being used as dumps issue.

10:39 a.m.: Walking south on Christie Street on the sidewalk towards Koreatown

10:56 a.m.: Laura and Boris wait for the light to change at Brunswick and Bloor in front of Future Bakery in The Annex.

11:03 a.m.: Varsity Stadium, the eyes of 10 year old girl pops out of her head as she reads the orange warning labels on the bag of garbage.

11:07 a.m.: The ROM. Short pause as Boris takes a breather before turning south towards Queen's Park and Afrofest

11:13 a.m.: Walking through Queen's Park and seeing Afrofest stalls and tables being set up, likely delayed by the earlier rain.

11:33 a.m.: Passing by Mount Sinai Hospital as we head down Hospital Row.

11:40 a.m.: Standing at the corner of St. Patrick Street at Dundas Street West. Village by The Grange.

11:42 a.m.: Friend of Dufferin Grove Park Jutta Mason catches up with us and joins the walk. She is on her bike. 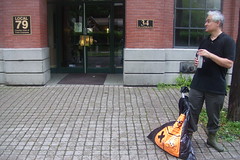 11:55 a.m.: Entering Nathan Phillips Square. The Toronto Outdoor Art Exhibition is on this weekend. We weave our way towards the entrance to City Hall.

11:58 a.m.: After speaking with the City Hall security guard at the main entrance, Boris wonders if he is one of the Community Animators who can help get people get started in living green. His Walk For One Bag of Garbage is indeed a start. 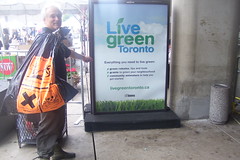 12:00 p.m.: Walking past the Peace Garden in Nathan Phillips Square through the Art Exhibition towards Queen Street.

12:15 p.m.: Jarvis and Queen, Moss Park is across the street. Today is day of the annual Orange Parade. Parade watchers stand on the sidewalk. A five minute conversation ensues with parade goers. Examples of how other jurisdictions deal with minimizing garbage are shared. Bottle deposits as in the Province of Newfoundland and Labrador and mentioned.

12:20 p.m.: Speaking with Customer Service non-unionized staff at entrance to Moss Park dump site. Better understanding of how this neighbourhood is using the park is gained. They have exhausted use of paved areas and shortly will be placing garbage on top of grass, with some material inbetween to prevent leachate from entering the soil. Sounds dubious. We see leaking already.

12:41 p.m.: We have reached the Frederick Gardiner Expressway. Here boris reminds us that the coverage afforded by the raised expressway would prevent precipitation from drowning any garbage placed here. Further, this corridor is no where near any residential homes, parks, commercial foot traffic. This location was one of the alternatives given to elected officials to place garbage instead of using parks as dumps.

12:47 p.m.: Walking past the site of the former Tent City along the Martin-Goodmand Trail, Luisa finally asks aloud, "Are we there yet?" 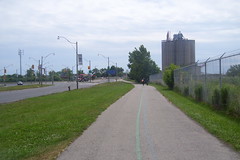 12:53 p.m.: Cherry Street Bridge. Entering The Portlands. Boris enjoys the vista of the Toronto Islands from here yet laments the loss of business this TOStrike has caused restaurant owners and lost wages of seasonal workers over there. Ferry Service has also been shut down causing those losses. Indirect casualties of the TOStrike.

1:00 p.m.: At Cherry Street and the western end of Commissioners Street. The reporters from Sing Tao have caught up with us. Boris shares his reflections of the walk thus far.

1:13 p.m.: 95 Commissioners Street. Speaking with the lone security guard in front of the Abitibi Recycling Division. He's there to make sure there is no illegal dumping. He is unaware of any picketing of the Abitibi plant earlier in the week.

1:17 p.m.: Walking past the massive Filmport Film Studio building on the south side of Commissioners Street, Boris wonders aloud what kind of mind imagines constructing such giant buildings and to what end?

1:24 p.m.: After pausing in the middle on the road, literally, Boris gathers himself and the fellow walkers for this final leg of the walk. The Commissioners Street Transfer Station is across the street.

1:30 p.m.: Boris Steipe has reached the entrance to the Commissioners Street Transfer Station, the final destination in his Walk For One Bag of Garbage. 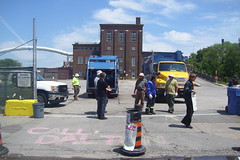 (1) The walk will start on Barton Street, just north of the ice rink shortly after 10:00 this Saturday.

(2) We will walk east along Bloor Street, passing the little Koreatown restaurants, past the University and the Royal Ontario Museum that is hoping for a thriving holiday economy this summer.

(3) We will turn south and go through Queen's Park, where there are no garbage dumps; we will pass by the Ontario Legislature, which is not currently in session.

(4) We will then cross a block to the west and turn on Patrick Street where we will pass the offices of CUPE Local 79 who are currently on strike.

(5) Turning east on Queen Street, we will pass City Hall.

(6) Still on Queen Street, we will pass the dump in Moss Park - "home to the homeless" - a site that is open, and active and piling garbage to the edge of unsecured ground.

(7) Turning south, we will get to the Gardiner Expressway and get a sense of the very large areas that could have been used as temporary dumps, sheltered from the rain that washes leachate into the ground.

(8) As we cross the bridge to the Portlands, we will have a good view of the Toronto Islands, where local businesses are struggling to survive a summer that normally would have provided them with a major portion of their annual income.

(9) On Commissioners Street, we will see vast, paved, empty spaces. We will also see offices of private garbage contractors and recyclers that were guarded by police yesterday.

(10) Finally our walk will end at the Commissioners Street transfer station, where garbage is being handled professionally, where no pesticide spraying is necessary and where the capacities are holding up well.

There I will deposit one bag of garbage.

I am sending you this because we have in some form or other interacted at the site or around the events at Christie Pits Park.

This walk is a private activity that is not affiliated with any group or organisation.

Thoughts after Saturday's "Walk for One Bag of Garbage"

I carried one bag of garbage from our Christie Pits dump to the Commissioners Street Transfer station yesterday. Several neighbours and friends came along. HiMY document the entire walk and in the shortest time created an outstanding documentation; his images and clips are on the Torontopedia Wiki and on Flikr, along with links to the media who picked the story up on Saturday and Sunday.

Thank you to all who were there and helped in person and in spirit.

Three images stand out in my mind as I think back about yesterday.

The first is a non-image: a sense of non-emergency, non-issue. We passed queues at the ROM, tourist buses, Afrofest, Outdoor Arts Exhibition, the Orange Parade ... people were going about their lives, coping, settling in. The hazards to health, environment, economy, social fabric ... are diluted across the City. We have heard how the fallout is harming many - but my conversations with "the street" on Saturday did not convey a sense of urgency.

The second image is the spirit of City workers at all places I have met them so far. Whether at our park, at City Hall, at Moss Park or at Commissioners Street, I have without exception met people who are friendly, open, compassionate about the strike's consequences on all sides, and passionate about their City. I have encountered a positive attitude that I find remarkable.

The third image is that of citizens who had driven their garbage down to the transfer station, who were stoically sitting in their cars in a long queue, being made to wait.