Public Domain text of the Asylum Wall poster from the Missing Plaque Project... 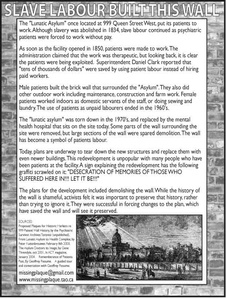 Asylum Wall poster from The Missing Plaque Project. THIS WALL WAS BUILT WITH SLAVE LABOUR

The “Lunatic Asylum” once located at 999 Queen Street West , put its patients to work. Although slavery was abolished in 1834, slave labour continued as psychiatric patients were forced to work without pay.

As soon as the facility opened in 1850, patients were made to work. The administration claimed that the work was therapeutic, but looking back, it is clear the patients were being exploited. Superintendent Daniel Clark reported that "tens of thousands of dollars" were saved by using patient labour instead of hiring paid workers.

Male patients built the brick wall that surrounded the “Asylum”. They also did other outdoor work including maintenance, construction and farm work. Female patients worked indoors as domestic servants of the staff, or doing sewing and laundry. The use of patients as unpaid labourers ended in the ['1960"]’s.

The “lunatic asylum” was torn down in the 1970’s, and replaced by the mental health hospital that sits on the site today. Some parts of the wall surrounding the site were removed, but large sections of the wall were spared demolition. The wall has become a symbol of patients labour.

Today, plans are underway to tear down the new structures and replace them with even newer buildings. This redevelopment is unpopular with many people who have been patients at the facility. A sign explaining the redevelopment has the following graffiti scrawled on it: “DESECRATION OF MEMORIES OF THOSE WHO SUFFERED HERE IN!!! LET IT BE!!!”

The plans for the development included demolishing the wall. While the history of the wall is shameful, activists felt it was important to preserve that history, rather than trying to ignore it. They were successful in forcing changes to the plan, which have saved the wall and will see it preserved.