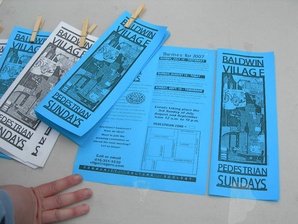 Baldwin Street Village is located on Baldwin Street between Beverly and McCaul Street and includes the piece of McCaul between Baldwin and Dundas. It is home to many great restaurants and other stores and is a prime lunch destination for those who at UofT, OCAD, the many nearby hospitals, Queens Park, and others.

In summer 2008, on the third Sunday in July, August and September, Pedestrian Sundays hopped over Spadina Avenue from Kensington Market and turned Baldwin Street and the bottom of Henry Street into a car-free zone filled with pedestrian friendly activities, music, and events.

for another lively celebration of community, culture and ecology.

Baldwin Village is a hidden treasure nestled in the heart of downtown - a history-rich urban village that represents the culturally diverse heartbeat of Toronto. Composed of a collection of 38 independent restaurants and retailers, this community is amplified by an abundance of international cuisine.

Imagine a mix of Chinatown, Little India, KoreaTown and Little Italy all-in-one, and then throw in Thai, French, Vegetarian, Japanese, Mediterranean, Malaysian, Vietnamese and other cuisines!

A cultural mosaic of people and lifestyles can be found in Baldwin Village. In addition to the exotic cuisines and warm personality of its family-run businesses, with both the Ontario College of Art & Design and the Art Gallery of Ontario just steps away, one also feels a distinct artistic influence in the area. Meanwhile, the adjacent University of Toronto campus and its students add a scholastic flavour to the neighbourhood.

Named after Dr. William Baldwin in the early 1800s, over the years, the neighbourhood has been home to many different groups: Jewish settlers in the 1920's, expatriate American draft dodgers and hippies during the Vietnam War, and the Asian community, already rooted in nearby Chinatown, flourished here in the 1980s.

The merchants and residents of Baldwin Village invite visitors to join them this summer as they introduce Toronto's best-kept secret to the city through a series of Pedestrian Sundays celebrations. This summer, why settle for just a taste of one culture when you can taste the world!

Here is the tentative schedule as it is at this point:

What do you see for Baldwin Village in the future? Given the huge arts community we hope to come up with a fun, futuristic vision for the street. Visionaries welcome! Featuring...

Ardene Shapiro - Guitar and Vocals ... and many more Guest Artists

Community Think Tank What's your vision for the future of Baldwin Village? ...with Michael J.

International Delicious Food ...And a swell time for all !!

Baldwin Street Village is known for its diverse collection of restaurants.

There are no pages with the tag "Baldwin Street Village".
Edit tags
Cancel
Nearby LocalWiki regions: Mississauga Guelph