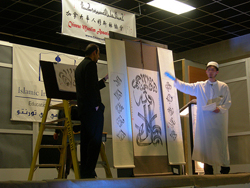 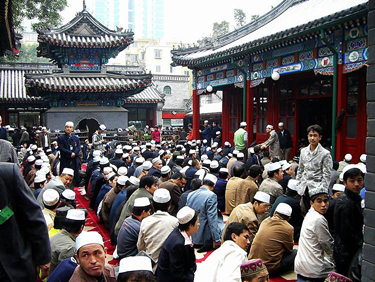 Chinese Muslim has over a thousand years of history and Islam in China has a rich heritage. Islam was first brought to China by an envoy sent by Uthman, the first Caliph, in 651, less than twenty years after Prophet Muhammad (P.B.U.H.). The Envoy was led by Sa`d ibn Abī Waqqās, the maternal uncle of the Prophet (P.B.U.H.) himself.

Chinese Muslims gathering on Juma in a typical Chinese Mosque It was during the Tang Dynasty that China had its golden day of cosmopolitan culture which helped the introduction of Islam. The first major settlements in China consisted of and merchants. The term "Hui" originated from the Mandarin word “Hui Hui,” a term first used in the Yuan Dynasty to describe Central Asian, Persian and Arab residents in China. By the time of the Song Dynasty, Muslims had come to dominate the import/export industry. It was during the Mongol-founded Yuan Dynasty (1271-1368) that large numbers of Muslims settled in China. The Mongols, a minority in China, gave Muslim immigrants an elevated status over the native Han Chinese as part of their governing strategy, thus giving Muslims a heavy influence. Hundreds of thousands of Muslims immigrants were recruited and forcibly relocated from Western and Central Asia by the Mongols to help them administer their rapidly expanding empire. During the following Ming Dynasty, Muslims continued to be influential around government circles. Six of Ming Dynasty founder Zhu Yuan zhang's most trusted generals were Muslims, including Lan Yu who, in 1388, led a strong imperial Ming army out of the Great Wall and won a decisive victory over the Mongols in Mongolia, effectively ending the Mongol dream to re-conquer China. The rise of the Qing Dynasty (1644-1911) made relations between the Muslims and Chinese more difficult. The dynasty prohibited ritual slaughtering of animals, followed by forbidding the construction of new mosques and the pilgrimage to Mecca.

After the fall of the Qing Dynasty, Sun Zhong Shan, who established the Republic of China, immediately proclaimed that the country belonged equally to the Han, Man (Manchu), Meng (Mongol), Hui (Muslim) and the Zang (Tibetan) peoples. In 1911, the provinces of Qing Hai, Gan Su and Ning Xia fell to Muslim warlords of the family known as the Ma clique. During the Cultural Revolution, mosques were often defaced, destroyed or closed and copies of the Quran were destroyed along with temples, churches, monasteries, and cemeteries by the Red Guards. The government began to relax its policies towards Muslims in 1978. Today, Islam is experiencing a modest revival and there are now many mosques in China. There has been an upsurge in Islamic expression and many nation-wide Islamic associations have been organized to co-ordinate inter-ethnic activities among Muslims.

The Chinese Muslim Association of Canada (CMAC) consisting Muslim brothers and sisters who came from Mainland China, Taiwan, Hong kong, Thailand, Afghanistan, Pakistan, Indonesia and Canada, is a non-government and non-profit organization, with a goal to actively promote the Chinese Muslim culture and history to Canadian society and the Muslim communities to enrich the Canadian multi-culture heritage, CMAC has also committed to act as the bridge between Canadian Chinese Muslim community and the world to promote understanding and harmony.

Activities and contribution of CMAC

We welcome you to join us.