On August 16, 1933, Christie Pits Park was the site of Canada's worst-ever race riot.

It began during a baseball game between a team made up mostly of Jewish players from the Harbord playground and a gang of Nazi sympathizers made up of the remnants of the Swastika Club.

People fought each other through the evening and into the night, armed with clubs and broken broom handles and lengths of pipe.

On Sunday August 17, 2008, an official Heritage Toronto historic plaque in located in the South-East entrance area to the park was finally installed and unveiled.

Many people turned out for the official Heritage Toronto Historic Plaque unveiling ceremony on Sunday, August 17 2008.

For a long time, the only memorial about this notorious event in Toronto's history was seen in posters around the neighbourhood posted as part of the Missing Plaque Project... 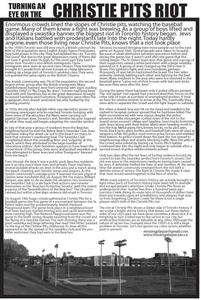 Christie Pits Riot poster as part of The Missing Plaque Project. The Christie Pits Riot is unknown to many Torontonians, even thought it was the biggest riot in Toronto’s history. The riot was the result of the simmering racial tensions in the 1930’s.

In the 30’s Toronto was still very much a British colonial city. English Anglo-Saxon Protestants held power in the city and made 80% (‘31) of Toronto’s population. Many non-British immigrants had been brought to Canada from all over Europe as cheap labourers, and made up a large part of Toronto’s working class. These immigrants were second class citizens and were not granted the same rights as the ‘British’ citizens. The Jewish community was the next largest ethnic group after the British immigrants, making up only 7.2% of the population. Many establishments banned Jews from entering with signs that reading “Gentiles Only” or “No Dogs, No Jews”. Toronto had long been thick with anti-Semitism, but as the great depression brought increased hardship and frustration, ‘foreigners’ were often the scapegoats. Anti-Jewish sentiment was fuelled by growing poverty.

In 1933, shortly after Adolph Hitler was elected to power in Germany, newspaper articles reached Toronto bringing with them news of the atrocities the Nazis were carrying out against Jews there. Toronto’s anti-Semites became inspired by what they read, and began adopting the swastika symbol. In July of that year a group of residents from the Beaches neighbourhood formed the Balmy Beach Swastika Club. They complained about the crowding, litter and ‘vulgarity’ at the beach, which they attributed to the large number of ‘obnoxious visitors’ who were riding the street cars out to the beach that summer. Many of these visitors were Jewish, and anti-Semitism seemed to be a cornerstone of the Swastika Club; they wore and posted swastikas and they attempted to have Jews and other ‘foreiners’ banned them from the beach. Even though the beach was a public park Beaches residents including the Swastika Club saw it as very much their own, and private. All of this outraged the Jewish community.

When the Swastika Club began to step up their actions with a march along the beach chanting anti-Semitic songs and slogans, and several Jews were attacked in the beaches, it seemed massive physical clashes were inevitable. But on August 9th the mayor, William Stewart, was able to convince the Swastika Club to scale back their actions and rename them selves as the ‘Beaches Protective Society’, with the stated purpose of the “beautification of the Beaches”. It seemed to have worked in stopping a riot, but a few days later violence erupted on the other side of town.

On August 14th huge crowds gathered at Christie Pits for a baseball game, the first game of a tournament between the St. Peters’ team and the predominately Jewish Harbord Playground team. The game took place in a neighbourhood that Jews had just started moving into, and racial animosities were running high. The Harbord Playground team won the game despite the taunting from the crowd and the flying of a swastika banner. The next morning there was a giant swastika and large lettering that read Heil Hitler painted on the top of the Christie Pits clubhouse. 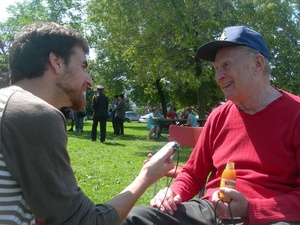 This is the little boy, now in his 80's, who was thought to have been killed during the Christie Pits Riot. He shared his memories during the Heritage Toronto Plaque unveiling on August 17 2008. This increased tensions and brought even more people out to the next game on August 16th. During that game a group of St. Peters’ supporters raised a white bed sheet with a swastika painted on it. A group of Jews went to tear it down. This ignited a fight, and soon the thousands of spectators had joined the brawl. The two sides violently clashed, battling each other and fighting for the bed sheet. Many residents in the area who were not involved in the baseball game “ came out of their houses with bats and sticks because they were after the Jews”. One Jewish boy was hit on the head and needed to be rushed to hospital, but rumour spread that he had been killed. As news of the riot hit the Jewish areas many more Jews (along with their Italian allies) headed north to join the massive brawl. Metal pipes and baseball bats were wielded as weapons. Pitch battles continued late into the night and spread to neighbouring streets and alleys as police closed down the park.

Only two days after the riot fears of further violence forced city council to ban the Swastika symbol from Toronto’s streets. The riot was spun in the mainstream media as having been caused by Jews and definitely fuelled the hate of anti-semites. At the Jewish community emerged from the riot with a stronger sense of unity. The fight at Christie Pits made it clear that Jews would stand up together in the face of attacks.

The riot at Christie pits shows a darker side of Toronto history, a side which is often left forgotten. Thousands of dollars have been put towards signs, art, and plaques that stop us from forgetting Garrison Creek, a creek that was buried underground, and now flows underneath Christie Pits. There is not even a single plaque that brings to light that the Christie Pits riot took place.

How racism played out in the 1930’s is very different from how racism plays out today, but it is still important to understand the darker forces our city was built on.