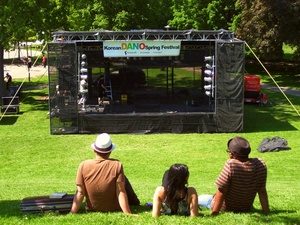 This year over one hundred vendors and thousands of people are expected to attend the Dano Festival.

To facilitate the enormous amount of people we have booked at Christie Pits Park, 750 Bloor Street West , just west of Koreatown.

This wonderful event, that happens once a year, features live music from talented musicians and bands, Korean culture shows (Taekwondo, Korean instruments, dances), business booths, great food, and an opportunity for businesses to introduce themselves to a wide range of Torontonians.

Dano, the 5th day of May in the lunar calendar, reminds us of ancient sacrificial rituals. In days of old, Dano was an important day, on which people would hold sacrificial rituals to the heavens to wish for a good harvest while resting for a while after transplanting the rice

The persisting folk games of Dano are the swing and ssireum (씨름). The swing was a game played by women, while ssireum was a wrestling match among men. In addition, mask dance used to be popular among peasants due to its penchant for satirical lyrics flouting local aristocrats.