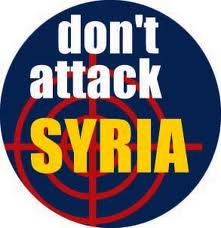 This was the second Don't Attack Syria Toronto Rally. The first one is documented below.

A couple of hundred people turned out in intermittent rain, more of a nuisance than a hindrance. The rally began shortly after 2 p.m. and went to around 3 p.m. rather than the original 4 p.m.

Due to the elements, the speeches were reduced and speaking times seemed to be cut back. Among them was a U.S. War Resister making the reminder that there were no Weapons of Mass Destruction in Iraq, which was the justification for that war of opportunity.

A vice-president from the Toronto and York Region Labour Council read aloud her organization's unanimous statement against The Killing of Civilians in Syria... to, um, save those Civilians in Syria. This point was re-iterated throughout the afternoon's Rally.

Not as much media attention this weekend, likely because TiFF has vacuumed up much of the news coverage today.

Video of most of the speeches 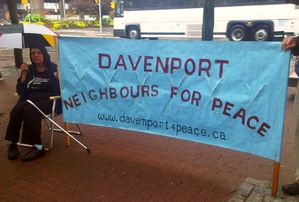 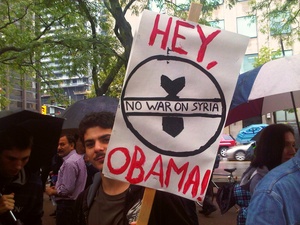 After the Rally, Many stood on the sidewalk across the street from the U.S. Consulate continuing to chant and share their message with drivers and passengers in passing vehicles on University Avenue. 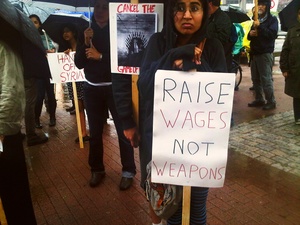 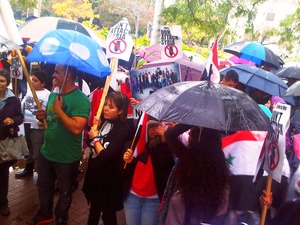 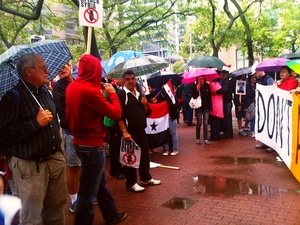 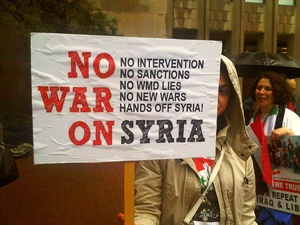 The Canadian Peace Alliance called for a National Day of Action on Saturday August 31 2013, for cities across Canada to host peace rallies saying Don't Attack Syria and Say NO To War.

Hundreds turned out in downtown Toronto  from 2 p.m. to 4 p.m.

They heard from anti-war speakers, Syrian Canadians, Labour Organizers, and youth about why they were calling on the U.S. Government and Canadian Government NOT to intervene militarily in the Civil War in Syria:

“We’ve seen in recent days that it’s been a lot more difficult for Obama to mobilize the international community and public opinion to support this war.”

“It’s because Americans and the international public are tired of these wars that have all been based on lies. The memories of the Iraq war are still fresh in their minds.”

“Up to 100,000 people have been killed and many more have been displaced in the civil war. Militarizing that conflict or bombing innocent civilians is not going to improve the situation.”

-- James Clark, an organizer with Toronto Coalition to Stop the War, which arranged the protest.

This Banner originally made by the Canadian Peace Alliance in 2002/3 said "Don't Attack Iraq". The Banner was at the front of 80,000 people in Toronto Marching back then to protest the Iraq War. Then in 2009, the CPA covered the "Q" with an "N" so the Banner said "Don't Attack Iran" as that country was under threat of attack. Now in 2013, the CPA covered the last third of the banner altogether with the word, "Syria". And that's the story of this Giant "DON'T ATTACK SYRIA" Banner.

A second banner belonging to the Toronto Coalition to Stop The War was raised and held in the air by volunteers throughout the rally. 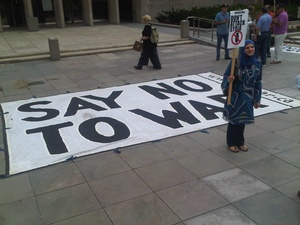 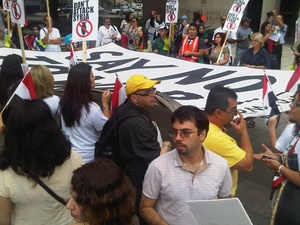 Photos from the Rally 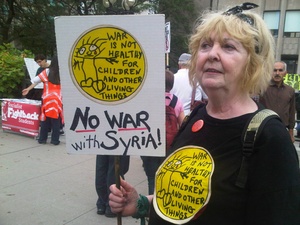 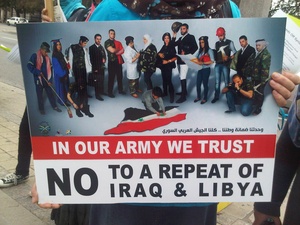 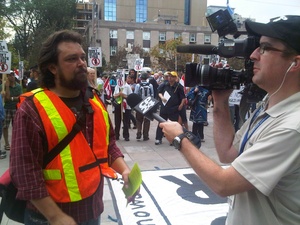 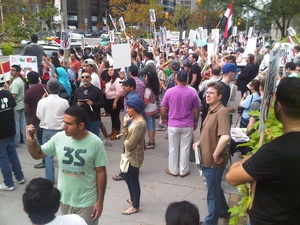 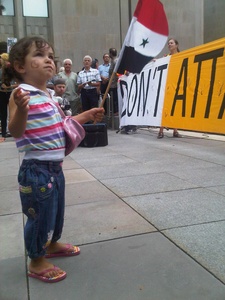 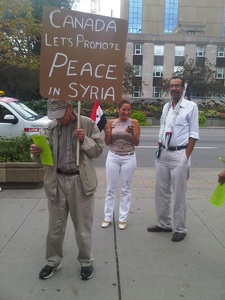