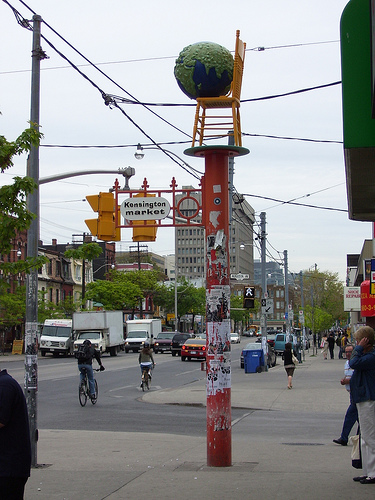 Every December 21, Kensington celebrates the solstice in a colourful pageant called the Kensington Karnival. The neighbourhood stages a traditional candlelit mummer’s parade, with gigantic 8-10 ft. high costumes and wonderfully atmospheric music. It takes place in late afternoon, after the sun goes down, as the market is crowded with holiday shoppers.

We're the neighbourhood with the coolest tagline!

Due to it's proximity to UofT, Kensington is a popular home for university students and many of the houses in the area have been converted into apartments.

During the 1920s, it was known as the Jewish Market. Today, you can sense the city's rich, multicultural mix, obvious in the shops packed with goods from Europe, the Caribbean, the Middle East, South America and Asia. A visit to Kensington is like a sensory trip around the world. It's also a treasure trove of vintage and second hand clothing shops, tucked in among eclectic restaurants and cafés.

The Kensington area is a maze of narrow streets and alleys, some of which are lined with Victorian houses. Many of these have been painted in bright colours. On busy days, the market is every bit as chaotic as street markets around the world: with a cacophony of sounds, fruit and vegetables stands piled high with produce, and a diverse, sometimes counter-cultural customer base. People are attracted not only to the good prices but also to the market’s unusual variety of shops, including some of Toronto’s best vintage clothing stores.

Some fascinating shops to visit: the House of Spice (who knew there were so many spices?); and Courage My Love (funky vintage clothing in Kensington Market).

Cheap eats and not so cheap eats, oops, make that ambiance!

In the 1920’s, about 80% of Toronto’s Jewish population lived in Kensington Market. Many of the residents had bolted down pushcarts in front of their homes, from which they sold a variety of goods. The economy was booming, and their business began to spill out onto the lawns, onto their porches, and even into the main floor of many of the houses. The “Jewish Market” was born.

As the community became more established, the original Jewish population began moving to wealthier suburban areas, and were replaced by new immigrants – Portuguese, West Indians, Koreans, Chinese. That’s why today, the market is comprised of an eclectic mix of cultures – one which is ever evolving.

and where to meet them.

Apartments in Kensington are typically small, remodeled portions of houses. While many places can be very pricey, inexpensive places do exist but are infrequently advertised widely. Instead these apartments are typically advertised by yard signs, flyers in local businesses and word of mouth. There are a small number of high density housings, including apartment buildings at McCaul and Elm and on Baldwin, just west of Spadina.

There are a few Bed and Breakfasts, including the Baldwin Village Inn.

The Spadina Streetcar, runs through the heart of Kensington, providing a convenient stop between Nassau and Baldwin Streets. On the eastern border, Queens Park Station and St. Patrick Station provide convenient subway access. Running east and west, both the College and Dundas Streetcars provide access to the northern and southern portions of Kensington.

Major thoroughfares through this neighbourhood, if any. Existing ones or those planned for the future. Major North-South streets. Major East-West streets.