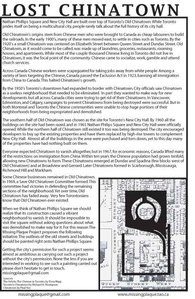 Nathan Phillips Square and New City Hall are built over top of Toronto's Toronto’s First Chinatown. While Toronto prides it self on being a multicultural city, people rarely talk about the full history of its city hall.

Old Chinatown’s origins stem from Chinese men who were brought to Canada as cheap laborers to build the railroads. In the early 1900’s, many of these men moved east, to settle in cities such as Toronto. By the 1920’s a small Chinatown was centered on ['Elizabeth Street"] between Queen Street and Dundas Street. Old Chinatown, as it would come to be called, was made up of laundries, groceries, restaurants, rooming houses, and apartments. While most of the couple thousand Chinese living in Toronto did not live in Chinatown, it was the focal point of the community. Chinese came to socialize, work, gamble and attend church services.

Across Canada Chinese workers were scapegoated for taking jobs away from white people. Among a variety of laws targeting the Chinese, Canada passed the Exclusion Act in 1923, banning all immigration from China to Canada. This halted Chinatown’s growth.

By the 1950’s Toronto’s downtown had expanded to border with Chinatown. City officials saw Chinatown as a useless neighbourhood that needed to be eliminated. In part they wanted to make way for new developments but all across Canada cities were trying to get rid of their Chinatowns. In Vancouver, Edmonton, and Calgary campaigns to prevent Chinatowns from being destroyed were successful. But in both Montreal and Toronto the Chinese communities were unable to stop huge portions of their neighbourhoods from being expropriated and demolished.

The southern half of Old Chinatown was chosen as the site for Toronto’s New City Hall. By 1960 all the buildings on the site had been razed, and in 1965 Nathan Philips Square and New City Hall were officially opened. While the northern half of Chinatown still existed it too was being destroyed. The city encouraged developers to buy up the existing properties and have them replaced by high-rise towers to complement New City Hall. Almost all of the buildings in the area were purchased and torn down, yet to this day many of the properties have had nothing built on them.

Everyone expected Chinatown to vanish altogether, but in 1967, for economic reasons, Canada lifted many of the restrictions on immigration from China. Within ten years the Chinese population had grown tenfold, allowing new Chinatowns to form. These Chinatowns emerged at Dundas and Spadina (few blocks west of Old Chinatown) and at Broadview and Gerrard. Later Chinatowns formed in Scarborough, Mississauga, Richmond Hill and Markham.

Some Chinese businesses remained in Old Chinatown. In 1969, a Save Old Chinatown Committee formed. This committee made victories in defending the remaining pieces of the neighbourhood. Yet over time, Old Chinatown has faded away. Very few Torontonians know that Old Chinatown ever existed.

When we think of Nathan Phillips Square we should realize that its construction caused a vibrant neighbourhood to vanish. It should be impossible to visit the square with out asking questions about what was demolished to make way for it. For this reason The Missing Plaque Project proposes the following initiative: The outlines of the old streets and buildings should be painted right onto Nathan Phillips Square.