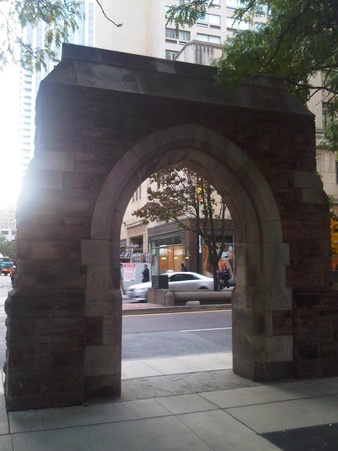 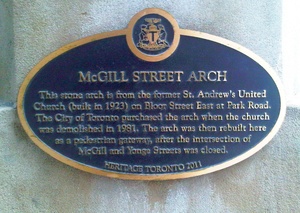 This stone arch is from the former St. Andrew's United Church (built in 1923) on Bloor Street East at Park Road. The City of Toronto purchased the arch when the church was demolished in 1981. The arch was then rebuilt here as a pedestrian gateway, after the intersection of McGill and Yonge Street was closed.

There nothing else like this anywhere along Yonge Street and it's easy to just walk by without giving it much thought.

Considering how many buildings lately are being torn down and replaced with glass and steel condominiums, the importance of this Arch can only grow with the passage of time.

Once in a while, local civic leaders talk about building a stone replica of this arch directly across the street on the western sidewalk of Yonge Street. If that ever gets done, it would be pretty cool to have TWO arches facing each other suggesting a kind of pedestrian continuity from this side of the street to the other.

The following was found in the thread about the McGill Street Arch on UrbanToronto, and goes into much more depth than the original Urban Decoder item in the TorontoLife Daily Dish posting:

I was the Urban Decoder at the time. Took me for freaking ever to research that piece. Eventually I got through to the long-retired minister of the church at Yonge and Bloor from which the arch was salvaged. He was of a very advanced age - late 80s, I think, if not older - and an absolute delight to talk to. Thanks to the wonders of digitization, I still have the interview in my music library (iTunes, no less). Since I could never get details or texture like this into the Decoder, I thought I'd type it up. Here is the end of what he told me:

"When [the church] came down, some bright person from the department of works and buildings at the city felt this archway was an interesting archway. They asked the church if they could have it, and the church said, "certainly, if you wish. Take it away!"

They decided, "we would like to put it at the end of McGill, on Yonge." So we said, "That sounds fine to us. We'll put a bronze plate on it about where it came from." And they said, "Don't put a bronze plate on it down in that neighborhood. It'll be pried off the first night it's there!" The result was, they didn't ever put a mark on it. They talked about it, and in the end, they decided that what they'd like to do - but they never got permission and they never got round to doing it - was to get one of these people who inscribes gravestones. On the inside of the arch, you'll probably notice that there are some flat surfaces. And they'd put that the arch came from St Andrew's Church on Bloor Street and was moved there on the demolition of the church."

I seem to also recall getting the explanation that Yonge St. in the mid-70s wasn't as genteel as it is now. Those who were there at the time would be better suited to weigh in on that than me. I was in contact with Heritage Toronto about this story, as well.

What was most remarkable at the time was the fact that *nobody* exactly knew where the arch came from - not the heritage department, not the BIA, not Kyle Rae himself, though they were all helpful. My foggy recollection is that Heritage Toronto had to look it up and get back to me, whereupon I had to go through the church, who found the retired minister. It's amazing how quickly history is lost, if you don't have a brass plaque to hold it in place.