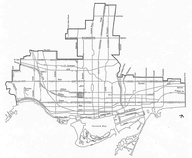 Nowadays, most often, "Old City of Toronto" is understood as being the pre-amalgamation City of Toronto that existed until 1997 within the Regional Municipality of Metropolitan Toronto.

From 1998 and into the first few years of Amalgamation, the New City of Toronto was referred to as The Megacity.