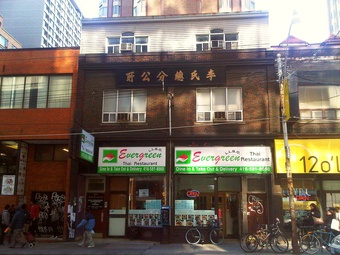 Before Nathan Phillips Square and New City Hall were constructed, the city's original Chinatown were taking up space there. As the Chinese business and property owners were either bought out or forced out, a number of them move up Elizabeth Street and took up shopkeeping along Dundas Street between Bay Street and University Avenue.

Eventually, Chinatown migrated west along Dundas Street, especially west of University Avenue towards Spadina Avenue where it still is today.

However, this had unintended consequences, as the Original Little Italy was along Dundas Street, Between University Avenue and Spadina. And that's why the Italian Consulate located at the north west corner of Dundas and Beverley streets is there, inside today's Chinatown. Without knowing this history, at first glance, the location of the Italian Consulate here makes little sense.

All that remains of that moment in our city's history of the Second Chinatown are a few shop facades, some Chinese Characters still visible from their original painting or installation on the outside of the buildings.