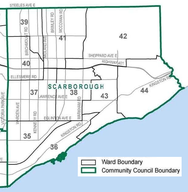 Map of Scarborough showing municipal ward boundaries. The former City of Scarborough is now part of the (new) City of Toronto as a result of an amalgamation of 5 Cities and one Borough by the Province of Ontario in 1998.

Scarborough is located on the east side of the City of Toronto, roughly bounded by the Victoria Park Avenue to the west, Steeles Avenue to the north, Scarborough-Pickering Townline and the Rouge River to the east and the southern boundary is Lake Ontario.

Scarborough's neighbours are North York, East York, Toronto to the west, Markham to the north and Pickering and Ajax to the east.