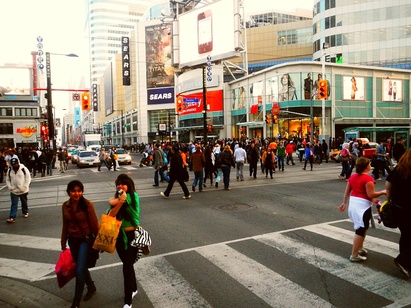 This is one of the Major Intersections in the Downtown Core with Yonge-Dundas Square on the south east corner of the intersection and the Eaton Centre taking up the south west corner.

The other Scrambles in the city are at Bloor and Yonge, and Bloor and Bay.

They seemed to be controversial before they were installed, but now, everyone from drivers to pedestrians to cyclists seem to have accepted them as a part of downtown life.